AMF member stranded in Europe – where is the help from the government? 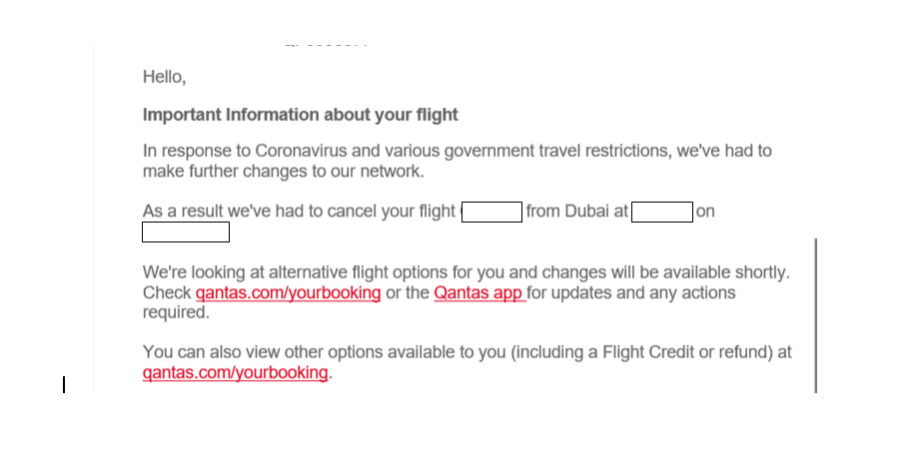 A long-time member of the Australian Manufacturing Forum is stranded in Europe and desperate to return to manage their business in Australia – but government travel restrictions on returning to Australia have not been exactly helpful, as the latest airline ticket cancellation (pictured) suggests. This is the story so far, by an AMF member.

I left Australia on 13 Feb for Europe.

No restrictions or warning about travel to this region at that time. This was to attend a trade fair that I’ve gone to for the last 15 years and has been my main vehicle through which I’ve built my export business so is an important thing for me to attend.

Within a few days of arrival, around February 18, panic  started and most of my meetings set up around the trade event were cancelled.

I posted on linkedin about this in March: “Three weeks ago today I should have been meeting with partners and customers at EW2020 but the shadow of coronavirus turned things upside down.

“Tens of millions of people around the world are now retreating to their homes; flights are cancelling; schools, restaurants, parks, cinemas are closing and the shadow looms large

“The stories of suffering and loss are very sad. The air is full of fear and panic. My countrymen (and women) are brawling in the supermarkets to get that extra pack of toilet paper for goodness sake!

“But where there is shadow there must be light. The light comes in the stories of Italians singing together from their balconies, or Louis Vuitton turning their perfume production lines to making hand sanitiser and delivering free of charge to the health authorities.”

In mid-March a “come home” advice was issued by the Australian government on their web site. No SMS messages or emails were sent by airlines or government as happens say if a flight will run 10 minutes late, or there is a typhoon or other event that will affect travel.

It was instead assumed by the government that all the people overseas would be reading various government websites multiple times every day just in case a message was issued.

They did post a “sorry the notification system is not working at this time message”. I am sure some people did not see the message at all.

In addition they had quietly shut some consulates and embassies and got their people back to Australia apparently before issuing the advice.

I was however on my computer and did see the messages as did thousands of people.

Many dropped everything and rushed to airports to sleep on the floor for 1 or 2 days just in case a ticket could be obtained. Dangerous in a time of pandemic. Some got lucky and got on a flight. Many got turned away.

Being close to 60 years of age myself, and my husband is 60 we did not think sleeping for a day or two in an airport to try to get flights seemed to be a smart thing to do in a pandemic,.

We did however start trying to communicate with our travel agent who said that our original ticket for April would go in May so that seemed a better option at the time.

The lockdown rule came fast, we had only 2 hours’ notice, coming at 10pm.  In hindsight some decisions may not look logical or in self interest but there was a lot of panic.

From a newspaper article I have seen that the airlines are saying that number turned away is 100,000 Australian citizens that have purchased tickets but not got onto a flight.

I had a ticket for April and at that time I was told it would run in May. That was not convenient but it did not seem too much delay but by May and all of June we had lockdowns, roadblocks and airport closures here.

It was illegal to travel to the airport from my location during that time.

The advice from the Australian government was that I should comply with local laws.

I spoke with the airlines and was told the airport was being opened on July 2 but the flights on that day were already full but i could get a ticket for July 3. I got a ticket.

Unknowns to me however the Australia federal government decided that April, May and June was “plenty of time” to return.

The ticket for July 3 disappeared off the Qantas web site.

I called and was told to call back tomorrow, called back told to call next week etc, in the end it took about four weeks and around 40 hours on the phone to get a ticket for August 13.

By August 13 however Melbourne airport was completely closed. So this got cancelled too.

Through this, since march, I’ve been in contact with DFAT, my federal minister, the travel agent, the airline, the ACCC and  my state minister as well.

The real trouble is that DFAT have been giving the advice to return as soon as possible by commercial means – but then behind the scenes the state & federal governments block the commercial means from functioning.

In addition my visa expired in May. I spoke with DFAT before it expired who told me to speak with the Turkish immigration. I did.

Until mid July having an expired visa due to the lockdown here was no problem but then suddenly there was two weeks to leave the country.

As I see it I’m here as a direct consequence of the federal government policies.

I spoke to DFAT who said that only after I was detained would they see if there was anything they could do.

The COVID here is bad and the hospitals are full. I am very concerned that if detained my chances are very slim.

I’ve told this to DFAT too as I thought it important to get it on the record. DFAT are adamant they will not assist with visa matters (or anything else for that matter).

The other issue I have with DFAT is that around June I heard about a list.

I asked DFAT and was told that there is no list. One week ago someone posted the link on Facebook. Finally I registered.

Apparently since this posting this official number of people trying to return has jumped from 18,000 to 30,000 but this is being portrayed in the press as people “just recently deciding to return to Australia”

I’ve been working on how to return since March.

Then in the last 2 days my ticket for October got cancelled and many people are posting the same, it appears Adelaide as well as Melbourne may be taking no international flights.

And in all this I acknowledge that I am actually one of the lucky ones, I have a roof over my head and clean food and water but I do want to get home.