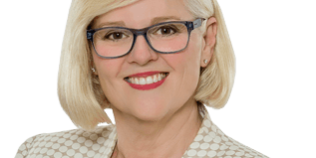 Karen Andrews has been returned as industry minister following the re-election of the Coalition federal government.

Andrews, a mechanical engineer by training, has been in the role since August 2018.

“Karen Andrews, as Minister for Industry, Science and Technology will work closely with industry stakeholders to create more and better paid jobs in traditional and emerging industries, and to continue championing science, technology, engineering and mathematics as key career paths for women,”  said prime minister Scott Morrison after the weekend’s cabinet reshuffle.

Andrews is the fifth industry minister since the Coalition came to power in 2013. Only of them, Ian Macfarlane, has held the role for more than a year.
Andrews entered parliament in the seat of McPherson in 2010, following a career in engineering at power plants and chemical plants, and then as an industrial relations advocate.
Picture: http://www.karenandrewsmp.com.au/
By EditorMay 27, 2019
Share this post
Share on FacebookShare on Facebook TweetShare on Twitter Share on LinkedInShare on LinkedIn Pin itShare on Pinterest Share on WhatsAppShare on WhatsApp