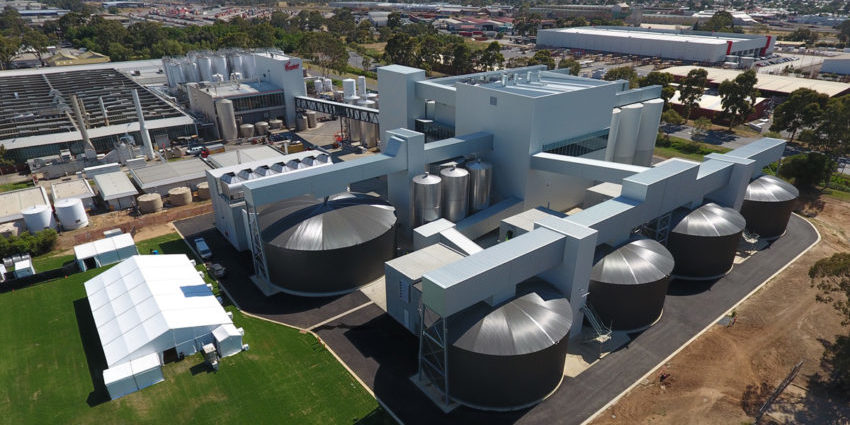 By Andrew Spence, The Lead SA

Opened at Coopers Brewery in Regency Park, Adelaide, in November 2017, the maltings has now reached 90 per cent of its 54,000-tonne a year capacity, well ahead of budget.

Of the almost 50,000-tonnes of malt produced at the site this year, Coopers will use about 16,000 tonnes for its own beer and 21,000 tonnes will be exported to Asia. Domestic craft brewers and distillers are predicted to use about 5500 tonnes – more than 10 per cent of annual production.

Coopers is the largest Australian-owned brewery and made its first beer in 1862. It sold its previous malting plant to Ausbulk in 2002 to help reduce debt from building its Regency Park brewery.

Coopers Malting Manager Dr Doug Stewart said Coopers’ pilsner malts were suited to the Asian market and could be blended with rice or corn sugar adjuncts.

He said there were further opportunities in Asia, particularly in Korea and Japan.

“We are supplying Japanese brewers in Australia and Vietnam but we are yet to actually supply them in Japan so I think there are some opportunities there,” he said.

“We planned on having roughly a third (of total malt production) going to Coopers, a third domestic and a third export so we’re probably a little bit above on the export to Asia, which is good.”

Coopers brews about 80 million litres of beer a year itself in Adelaide and contract brews for a number of international brands in Australia including Carlsberg and Sapporo.

On the beer side of things, Coopers suffered its first decline in beer sales last year in more than two decades, in part due to the booming local craft beer scene.

However, it still managed a 4 per cent profit, aided by sales generated by the new maltings.

Dr Stewart said the amount of malt sold to local craft brewers so far was enough to brew about 25 million litres of beer.

“A growing number of craft breweries are sourcing and enjoying the high quality malt from Coopers,” he said.

“Sales have also been made to whisky distillers in Sydney, Melbourne and regional South Australia.”

Coopers currently produces distilling malt, single origin pilsner style, pale and ale malts which vary slightly for the international and domestic markets, as well as malt made from the heirloom barley variety Schooner.

Australia produces on average about 2.3 million tonnes of malting barley, which is considered among the highest in the world.

The Coopers maltings allow for batch sizes of 180 tonnes and has been built specifically with specialty batches in mind. Its segregation and storage capabilities mean three or four of the 12 silos at the plant can be reserved for the craft industry.

“The reason why we like the craft story is because that’s been a big part of our strategy from day one – we wanted to differentiate ourselves from the other maltsters who don’t make craft malt a primary focus whereas we have a real focus on growing that,” Dr Stewart said.

“At our scale the craft industry is meaningful to us but we’re small enough and nimble enough to do the contract-grown barley on Kangaroo Island, to bring back Schooner barley, we can do all those things quite well so that’s where we are focusing a lot of our energy.”

He said if demand continued to grow there was room at the Regency Park site to double capacity by adding a second set of steeps, germination vessels and another kiln.

“We’ve deliberately not gone to 100 per cent yet, this’ll be our second year and we’ve still got some commissioning to do and some improvements to make,” he said.

“I think we’ll tidy everything up in the next six months and then we can push the volumes up.

“We might prioritise some markets at that point but potentially we can double the capacity so that will be a big decision.”

This article and the featured image originally appeared at The Lead SA.