Austal contracted to build first steel vessels for US Navy 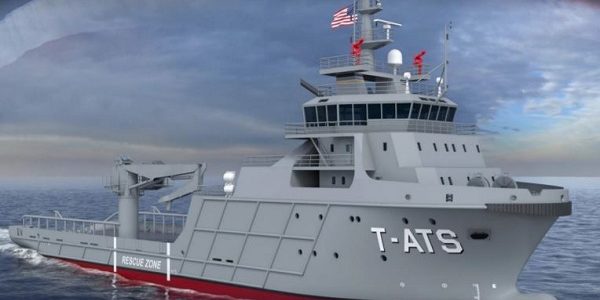 Perth international shipbuilder Austal has made a major breakthrough, winning its first contracts to build steel ships for the US Navy.

Austal USA has won a $198.5 million contract to construct two new Navajo class Towing, Salvage and Rescue Ship (T-ATS, pictured) for the USN at its shipyard in Mobile Alabama.

The contract establishes options for up to three additional T-ATS ships which, if exercised, will bring the total value of the contract to $528.6 million (US$385 million).

The contract award follows a US$3.6 million contract under which Austal prepared a functional design for the new Navajo T-ATS, an 80-metre steel monohull vessel with multi-mission capability to support a variety of towing, salvage, search and rescue, oil spill response, humanitarian assistance and surveillance activities.

The T-ATS can also embark containerised systems including cyber, electronic warfare and decoy and surveillance packages.

The vessels mark a departure from the 25 large aluminium multi-hulled warships that the company has built for the USN at its yard in Mobile, Alabama.

Austal and the US government recently expanded the shipyard at Mobile at a cost of US $100 million to enable it to construct steel ships, with this the first contract awarded.

Austal CEO Paddy Gregg said the contract was an exciting milestone and followed on from the successful addition of steel capabvilities at its Henderson shipyard south of Perth,

Gregg said: This is great news for Austal USA as they enter a new era of steel shipbuilding in the United States, supporting the Navy’s requirements for steel ships.

“…These ships will be able to support USN fleet operations in a variety of missions.”