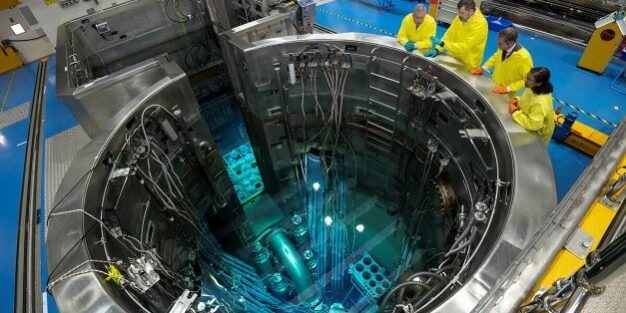 International Atomic Energy officials have given a positive assessment of Australia building nuclear submarines in terms of threats of nuclear proliferation, and given general support to nuclear’s role in decarbonising the economy.

IAEA director-general Rafael Grossi, speaking at the Lucas Heights nuclear reactor in Sydney, said he his visit to Australia had underlined the need for a partnership between the agency, Australia, the United Kingdom and the United States to prevent the diversion of nuclear material from a navy submarine fleet.

He told a press conference along with industry minister Ed Husic that Australia’s commitment to proliferation was unwavering, and it had been ‘confirmed’ by his visit.

Grossi said: ” We’ll have to work together, we have to do it all the time, but this couldn’t be more reassuring to me.”

The IAEA regularly inspects Australia’s nuclear facilities and visited Australia at the invitation of the new Labor government to study the strength of nuclear regulation, science and industry.

Grossi said the choice to build nuclear submarines was a political choice, and one for Australia to make.

“All I do is to make sure that out of these political choices that the nation is making, there won’t be any negative repercussions, in terms of nuclear weapons, which has been one of tenets of Australia’s foreign policies for decades.”

The Australian Nuclear Science and Technology Organisation’s OPAL reactor at Lucas Heights is a major producer of radiopharmaceuticals used in medicine, and supplies 50 per cent of the world’s needs for irradiated silicon used to make silicon chips.

Industry minister Husic said that in 2023 Australia would celebrate seventy years of safe and practical stewardship of nuclear reactors.

Husic said: “Australia is amongst the best at what we do when it comes to nuclear applications that are enabling research and innovation, supporting industry, and delivering health benefits to people in Australia and around the world every day.

“ANSTO’s capabilities support Australia’s ambitions for advanced manufacturing processes and has contributed proudly both domestically and internationally in the nuclear science sector.”

Grossi was also asked about the role that nuclear power could have in mitigating climate change.

He said nuclear power ‘does play a big role’, and was one of the choices which could mitigate harm to the environment.

“Globally, it is generating already around 25 per cent of clean energy.

“It’s an emission-free source of energy (but) it’s not for everyone. Every country has a different approach.”

Grossi was asked whether he would welcome a conversation with Aistralia on generating nuclear power.

Grossi: “I would welcome any conversation with Australians, it’s always a positive conversation.

“Again, what we do is give the facts – advice when requested – and I believe there is a global interest in this, so I don’t exclude that that may happen.

“As I understand it’s not an option – an active option at the moment, but it’s not a discussion that is absolutely foreclosed, so we will see.”