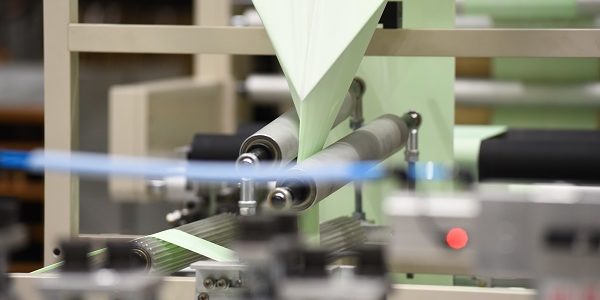 The increased attention to plastic waste in the last few years has been unmissable. Just before the pandemic disrupted life, the country held its first National Plastics Summit on March 2, with hundreds of millions of dollars in investments pledged by companies to address the problem.

About three years ago, Scott Morton, the founder of packaging manufacturer Peakfresh — which has been manufacturing since 2006 — started to look beyond low-density polyethylene.

The company had done well out of modified atmosphere packaging technology — which removes gases and maintains humidity and freshness — and achieved awards including small business exporter of the year in SA in 2017. But Morton, who runs the business with his father, says, “we started looking for alternatives to plastic. We were a bit nervous about where it was headed and were aware of the environmental impacts.”

It has grown to 25 employees, running three shifts a day making compostable bioplastic films and bags. It added a second extruder in February this year and now runs four.

“This year is when we really kicked off into large volumes,” Morton tells @AuManufacturing, saying it’s been “business as usual” against the backdrop of Covid-19.

BioBag World Australia uses Mater Bi resin, developed by Italian chemical company Novamont. This is made of ingredients such as “starches, cellulose, vegetable oils” and is a drop-in replacement for polyethylene. It can be extruded, injection moulded and casted, according to Novamont, breaks down anywhere there is air and microorganisms, and produces no microplastics or toxic contaminants. 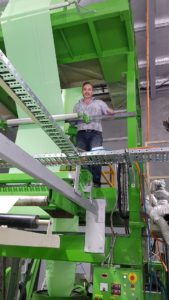 Morton says its wide applicability has allowed the company to develop a series of new products, most recently a mailing film launched in July. In September 2019 it announced a world-first shrinkwrap packaging for cucumbers, and sells other products such as mulch films, dog poo bags and bin liners. It is currently bringing a new compost bag to market.

“If you make it out of plastic, we can probably make it compostable,” he adds.

“We’ve got a number of customers that are now coming to us and saying, ‘I want a better solution’ and we work with them to create a compostable alternative.”

His own state, South Australia, has been especially proactive on single-use plastic bags. These have been banned (not including biodegradable bags) since 2009. Other states have followed. Only NSW hasn’t phased out single-use bags, but will likely do so within a year.

Morton is optimistic that two recent challenges to more sustainable plastic use will pass. These are low oil and gas prices due to reduced global fuel use this year — making inputs for regular plastics more competitive versus bioplastics — and the high level of disposable container use due to lockdowns and increased food delivery and takeaway.

He is less optimistic on the topic of support for local manufacturing, despite apparently high levels of goodwill.

BioBag’s main competitors are imports, and Morton sees no evidence that local purchasers are swinging in favour of locally-made.

“Unfortunately the rhetoric is not feeding through. As much as we’re cost-competitive, we’ve still got a number of councils around Australia still choosing Chinese product,” he says.

“People have strong feelings, but it’s not flowing through. I’m trying to work out why… We’re losing contracts for as little as 4 per cent, which is crazy.”

“There’s all these strong feelings and they love commenting on it. However, I’m here in Adelaide, employing 25 people, yet there are still councils that are willing to import a product.”