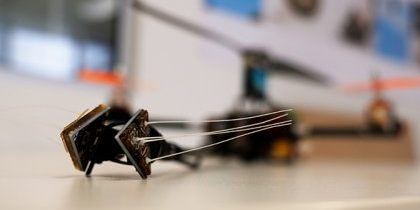 A University of Queensland engineer has led a team creating affordable “whiskers” to help small drones sense and navigate in their environment.

UQ’s Dr Pauline Pounds led a team that has developed sensors to help drones working in “peripersonal space” – immediately around but not touching a person. According to a statement from the university, the total hardware cost involved was only $30, helped enable navigation and stabilisation of drones in cramped spaces, and was sensitive enough to detect human breath from half a metre away.
“They can be used to measure fluid velocity, as well as to detect the bow-wave of oncoming air of an approaching object before it actually touches the whiskers,” Pounds said.

“The whiskers are long slender fibre ‘hairs’ made from the same plastic material that 3D printer extruders use.

“They are attached to small force-transmitting plates that are glued onto a miniature tripod of pressure sensors, which can then detect tip loads as low as 0.33 milligrams – less than the weight of a flea.”

It is not the first time researchers have borrowed from nature, specifically rats’ “vibrissae”, to improve the way a robot senses. Examples include Bristol Robotics Lab and University of Sheffield’s rat-inspired “Scratchbot” and work from Northwestern University looking at different whisker configurations and how force feedback from these could determine the location of an object.