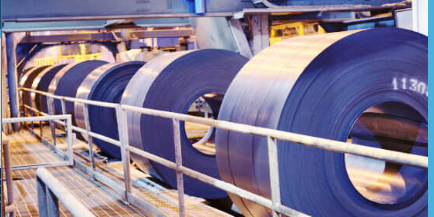 Integrated steelmaker BlueScope (ASX: BSL) has reported its third successive underlying profit of more than $1.1 billion despite a slowdown of sales in Australia.

The company today reported an underlying EBIT of $1.35 billion, up six per cent, and a net profit after tax of $1 billion.

CEO Mark Vassella said: “Despite some softening in commodity steel spreads and domestic volumes in the second half, in FY2019 BlueScope delivered another very good result.

“BlueScope is very focused on generating returns above its cost of capital in order to create value for shareholders.”

Underlying returns on capital were 19.5 per cent for the year, with shareholder returns bolstered by the company’s aggressive share buy-back scheme.

The company’s Australasian, Asian and North American businesses all performed well, though there has been a write down of Thai operations and a slowdown in Australia.

Weaker volumes in Australia arose from a downturn in construction and supply chain destocking.

Australian EBIT was $535 million, down nine per cent.

Demand for premium branded coated steels such as Colorbond was down seven per cent, a result Vassella described as ‘broadly resilient’.

The company is moving ahead with its expansion of its North Star BlueScope operation which will add 850,000 tonnes to domestic steel production in North America.

Vassella said: “North Star is recognised as a best in class asset.

“Moreover the project has future potential growth through possible debottlenecking to add a further 500,000 tonnes per annum to steelmaking capacity.”

The company continues its manufacturing improvement activities and believes it now has a portfolio of ‘fit’ assets in primary steel production and downstream markets such as coated steels and steel buildings.

“BlueScope is now a very resilient global company with a strong balance sheet and high quality assets which provide the capacity to withstand and potentially take advantage of tough cyclical conditions.”