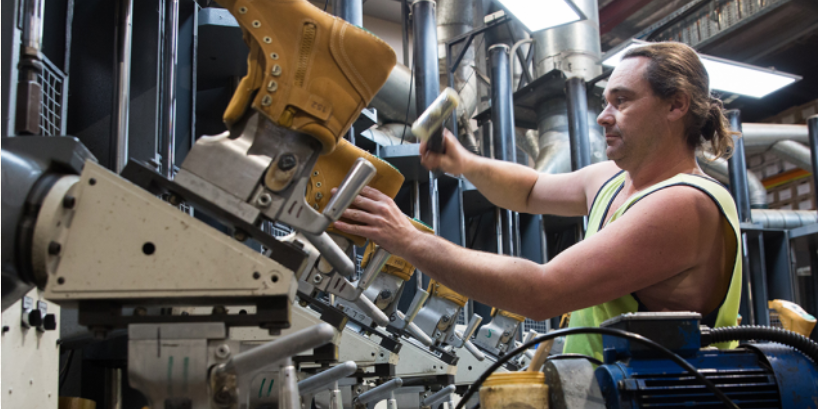 The trend towards more staff in the WA mining industry leaving their offices for work at the coal face has boosted sales by WA boot manufacturer Steel Blue by more than 20 per cent in the past year.

The company, which manufactures work boots in Indonesia and Perth, has just invested $2 million in its Malaga, Western Australia plant (pictured) to service defence and mining companies.

Steel Blue boots has enjoyed record sales in 11 of the past 12 months and now turns over more than $100 million a year.

And appetite remains “robust” even with ongoing COVID-19 lockdowns in the Eastern States, which brought construction activity in Sydney to a standstill last month, according to CEO Garry Johnson.

Johnson said there were more people working in the field and a lot more people changing jobs which also boosts demand.

“It’s slowed down a little bit this last month with what’s happening in NSW in particular, but also Victoria and Queensland (lockdowns) slow demand for our product, but it’s still quite robust.”

About 20 per cent of Steel Blue’s business comes from WA, with other markets in Australia, New Zealand, Europe and the US.

State and Federal government building grants to pull the economy out of the depths of Covid-19 sparked home building, while billions of dollars in infrastructure spending has been lined up for the post-pandemic recovery.

Deloitte Access Economics this month estimated WA had $26 billion worth of engineering construction projects under way and has $110b of infrastructure projects in the pipeline — more than any other State or Territory.

Johnson said he was acutely aware his sector had been targeted by government stimulus but couldn’t help but feel ‘a little bit guilty’.

“Without a doubt, (shipping) has been challenging.

“Sometimes we have to pay four to five times what we normally pay and you still can’t be guaranteed of service.”

The privately owned company employs just under 80 people across Australia, including about 60 in WA. It was founded in 1995 by Ross Fitzgerald and four other working directors.

Johnson said Steel Blue also wanted to be at the forefront of sustainability and was tracking to have Climate Active certification to be Scope 3 carbon neutral by October.