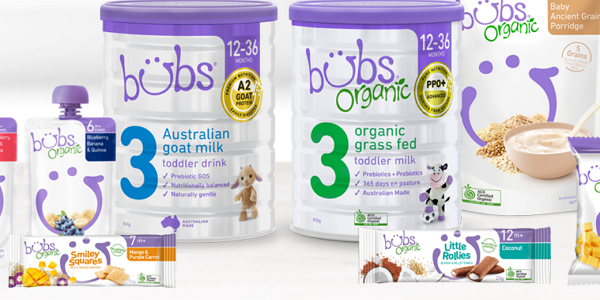 Infant formula manufacturer Bubs Australia has stepped in to supply 1.25 million cans of infant formula to the United States in a development even hailed by US President Biden.

The company, which is an experienced exporter throughout Asia and China through daigou and e-commerce channels, has increased production at its Dandenong, Victoria plant to supply the product over the coming weeks.

The plant is working three shifts a day to fulfil the emergency order which was approved by the US Food and Drug Administration, according to media reports.

According to a Bubs statement this morning: “Bubs complete range of infant formula already meets the nutrient requirement of the US Infant Formula Act for an iron fortified infant formula.

“500,000 tins are ready for immediate export to the United States with the remaining 750,000 tins production already planned and schedules for completion in the coming months.”

The US is also importing formula from Europe to cover shortages partly caused by the recall of some products by US maker Abbott Laboratories in February.

Four giant companies control 90 per cent of the US formula market, with Congress demanding answers and assurances about future supplies, according to a Bubs investor update on 19 May.

Even before the latest US development the company had boosted supplies through its existing US channels, which include Amazon and Walmart e-commerce sites and 794 independent retailers.

Bubs manufactures goat and cow milk products in Australia and had been experiencing record sales even before the latest boost.

In the March quarter Bubs revenue jumped 67 per cent to $19.7 million on the back of Chinese sales, with revenue for the first three quarters $48.5 million, close to full year revenue last year of $46.8 million.