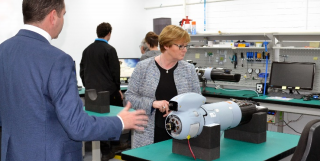 Defence minister Linda Reynolds has signaled support for Australian involvement in future purchases of unmanned aerial vehicles for the army with a surprise visit to Orbital UAV in Perth.

Coming so soon after the release of an updated Force Structure Plan which foreshadowed new spending on unmanned military systems, the visit to UAV engine manufacturer Orbital is significant.

Orbtal supplies small UAV engines to defence prime contractors Boeing, Textron Systems and Northrop Grumman in the US and an undisclosed customer in Singapore.

Its relationship with Boeing subsidiary Insitu is particularly significant, with Orbital designated the primary engine supplier for two UAV systems.

Boeing in Australia is separately developing the Loyal Wingman UAV which will fly in company with the F-35 joint strike fighter – the first of three planned prototypes was recently rolled out.

The government’s Force Structure Plan envisages $700 million in tactical UAVs in the next decade and $1.3 billion in maritime UAVs to carry out operational, intelligence, surveillance and reconnaissance missions in the next 20 years.

Orbital UAV CEO Todd Alder said the minister’s visit enabled the company to outline plans for the company to be the world’s leading supplier of propulsion systems for tactical UAVs.

Manufacturing news briefs – stories you might have missed
June 21, 2021