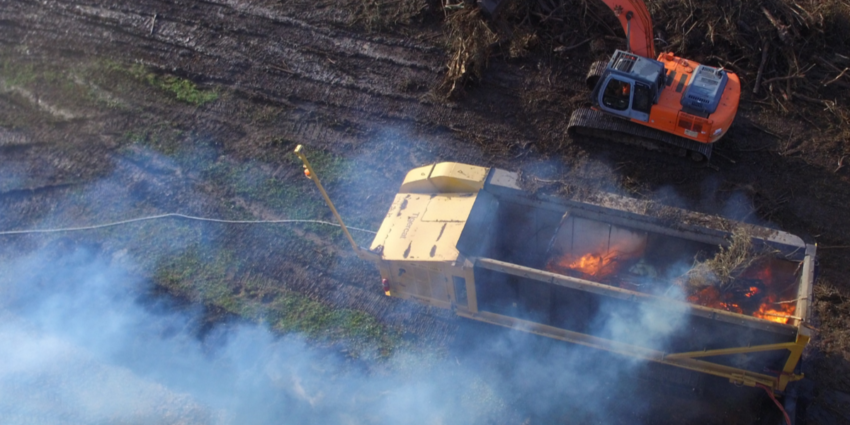 A group of wine industry environmentalists are turning feral olive trees removed from Fleurieu Peninsula national parks into a biochar product to boost the health of McLaren Vale vineyards.

The olive trees are then burned at 500C in environmentally friendly machinery called a Tigercat.

“We wanted a methodology that would work with biodiversity easier, be less time consuming and more effective,” said Harvey, a fifth-generation winemaker of Chalk Hill Wines and McLaren Vale Distillery.

“Once we removed the woody weed waste we weren’t just incinerating it into atmospheric gases, but we could use the biochar methodology to end up with a stable form of carbon that stays in the soil.”

“We have done three trials with the biochar and we are seeing that the vines are generally healthier. Healthier grapes will make better wine,” he said.

“Biochar retains nutrients and moisture … we are building resilience in the vineyard and we’re also reducing fire risk as olive trees are extremely flammable.”

The Department of Environment and Water, Biodiversity McLaren Vale and Peats Soil and Garden Supplies are among the organisations collaborating in the national parks project.

Ten of those years have been spent experimenting with biochar.

“We have been playing around with it (biochar) for about 10 years, trying to learn and understand what a good and bad biochar is, going to workshops and being part of the ANZ Biochar Industry Group,” Wadewitz said.

The large machine burns organic matter at 500C and reduces its volume by up to 95 per cent.

Wadewitz said there was great potential for commercialising biochar by inoculating or ‘charging’ it with compost.

The result is a valuable product that can then be sold to commercial partners including local vineyards, with potential also for fruit and vegetable crops.

“Somebody told me that biochar is like a big hotel that has been built without any occupants,” Wadewitz said.

“When you put the two (biochar and compost) together, it becomes this big happy party and the rooms are full of people.”

Wadewitz said the biggest challenge with biochar is the cost, with a high price point of around $1000 per tonne making it uneconomical for farmers.

“It’s got to provide some sort of return on investment for the farmer. So, it will be a case of supply and demand,” he said.

“There are many biochar plants that are not far from coming online. Once that happens the curve will soon come down.”

For now, the Biodiversity McLaren Vale group and Peats Soil’s goal is to continue working towards the creation of a circular economy.

“We are reducing the fire risk, as olive trees are a prolific feral weed species and extremely flammable,” Harvey said.

“Rather than just incinerate the olives, we can turn it into a stable form of carbon and sell it on the market.”