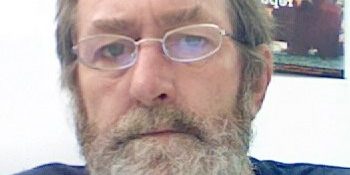 Tony Evans has been publishing a series of articles on social media on ‘worker friendly’ reforms to Australia’s tax system. Here he proposes a return to public and private sector co-investment, and a fresh approach to SME financing for retooling and growth.

Despite the devaluation of the Australian dollar over the past nine years the imported content of local sales continued to grow until the shutdown, a clear case of market failure.

The result for March 2020 is a projection based on preliminary trade data from the ABS which says goods imports grew by around 10 per cent in the quarter. 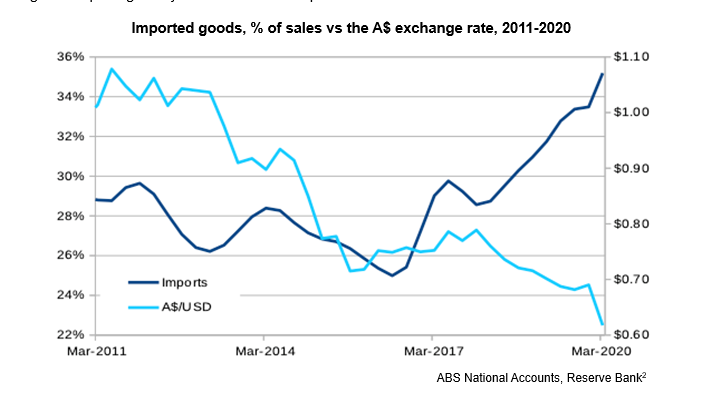 Reversing the steadily rising import penetration rate implied in the chart requires much than traditional industry policy action, particularly in the short term.

Instead, fundamental changes in economic strategy are needed if we are to maintain our living standards and the way of life we treasure so much as well as create new jobs across the traded sector of the economy.

It will be important that Australia’s free trade agreements are renegotiated so that they meet the needs of Australia’s manufacturers. The USFTA is effectively dead in the water after Donald Trump imposed tariffs on Australian made goods last year, and the China FTA (essentially means) that all of China’s exports are admitted into Australia duty free.

The way forward is in our past, as it often is.

Joint public-private co-investment in research and development, with finance provided by a publicly owned investment bank is the key to building the new industry capabilities and capacity that are central to national sovereignty and security like defence and medical equipment, commercial research and transport and communications.

From 1946 until 1959 the Commonwealth Bank’s Industrial Finance Department fulfilled the role of supporting local industry development. In 1958 the Department’s assets totalled £30,738, equivalent to nearly $1 billion in 2019 values.

A renowned economist, Mariana Mazzucato, explains how smart phone technologies were developed by public sector agencies before they were corporatised.

Fulfilling a role as an ‘entrepreneurial state’, as Mazzucato terms the process, Australian governments once did these things, and they can do them again.

Australian businesses like CSL, ASC, Qantas and Telstra all started as government owned corporations while Cochlear and many others got their start from the R&D tax concession.

Fast growing younger manufacturers like Adelaide’s Redarc and Geelong’s Carbon Revolution have grown rapidly on the back of structural adjustment grants and similar funding programmes.

Scientific and commercial research and development

An investment of $4 billion over four years in a combination of R&D grants and direct investment in scientific research by government would aim to develop new industries.

These grants would be matched dollar for dollar by innovation intensive businesses across the traded sector and be overseen by a Board composed of industry and science representatives with a union member to represent the interests of workers.

Much of the direct expenditure on R&D could be channelled through the CSIRO.

Meanwhile, in the immediate aftermath of the shutdown most small and medium-sized manufacturers will need to find and develop new market segments as transnational corporates take advantage of their economies of scale to cut costs and increase their market shares to the detriment of smaller competitors.

Yesterday I spent a good part of the morning talking about this with a medium-sized manufacturer that employs more than 300 people in Adelaide’s southern suburbs.

The business is at the cutting edge of technology utilisation and an impressive 60 per cent of its workforce are tradespeople including a good proportion of advanced trades and engineers and other diploma credentialed workers. But its’ managing director, who took me on a guided tour of the factory, is justifiably worried about the future.

Like plenty of other business people he doubts that the economy will ‘snap back” to health and sees the period between now and September as being fraught with dangers for his company.

He has already been diversifying the business adding defence equipment to his automotive markets and he’s been looking at medical devices more recently.

According to his calculations the cost of re-tooling his manufacturing operations in both Adelaide and Melbourne would require an investment of $10 million and that start-up and retraining costs would add another 70 per cent to that for a total of $17 million over three years before the changeover was complete.

I made a quick back of the envelope calculation finding that the budget cost of a three year, 100 per cent investment write-off available to all manufacturers would be a bit over $5 billion along with another $2.6 billion for all professional and scientific services providers.

This would mean that capital expenditure for these two industry sectors would increase by nearly 200 per cent over the next three years.

Many businesses can’t access equities markets for one reason or another and their debt to sales ratios are all ready too high. So governments and the public sector generally will need to step up to the plate and help out.

Given that we’re only talking about a cost of just $2,000 in taxes forgone per employee each year for a 100 per cent tax write off the benefits far outweigh the costs.

Tony Evans is industry development officer at the AMWU, and a former board member of the Austraian Manufacturing Council.