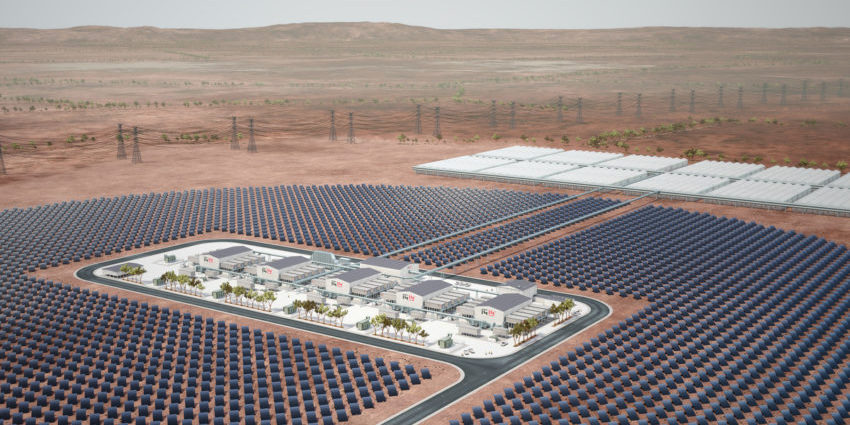 The company, based in Adelaide, South Australia, plans to build up to 400MW of solar PV on the site and install a grid-scale Thermal Energy Storage System, which it calls TESS-GRID.

1414 Degrees aims to progressively scale up the storage capacity to several thousand MWh. It says a TESS-GRID at this scale would be able to supply many hours of dispatchable electricity with spinning reserve from its turbines and a range of frequency control ancillary services (FCAS) to support grid stability.

The electrically charged TESS-GRID could also potentially buy and store electricity generated by other renewable farms on the high voltage transmission network in the region, strengthening firming services and earnings from market arbitrage.

The Aurora Solar Energy Project, about 300km north of the South Australian capital Adelaide, has SA Government development approval for a 70 MW solar PV farm and 150 MW of generation from a concentrated solar thermal plant.

The AU$650 million plant would have been the biggest of its kind in the world and was approved to incorporate eight hours of storage or 1100 megawatts-hours. However, the project was scrapped in April after SolarReserve failed to secure commercial funding for the project.

1414 Degrees will fund the $2 million acquisition through cash reserves.

In a statement to the Australian Stock Exchange today, 1414 Degrees Executive Chairman Kevin Moriarty said the electricity firming services would be developed to similar scale as the previous project.

“We will be using South Australian technology to create a large-scale, thermal energy storage plant near Port Augusta able to supply reliable power on demand to the national grid,” he said. 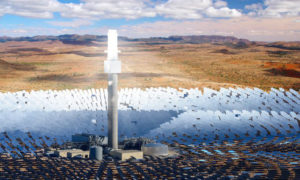 An artist’s impression of the Aurora plant originally planned by SolarReserve for South Australia.

The 1414 technology takes gas or electricity from any source and stores it as latent heat in silicon which melts at 1414°C. The energy from the latent heat can then be reclaimed and distributed as electricity and/or heat when required. A 10MWh storage unit is about the size of a 40-foot shipping container.

Dr Moriarty said the Port Augusta site had several clear advantages for the development of the TESS-GRID solution.

“The unregulated high-voltage transmission line to the OZ Minerals Carrapateena and Prominent Hill mines is being constructed along the boundary of the Aurora Solar Energy Project, and provision has been made for a substation at the existing Aurora site with direct connection to the Davenport substation in Port Augusta,” he said.

“Davenport is part of the major transmission networks to Eyre Peninsula, Adelaide and the new interconnector to New South Wales. This project is currently not impacted by marginal loss factors (MLF) that have constrained output from renewable farms in remoter parts of the national grid.

“We will reopen negotiations with OzMinerals and ElectraNet as soon as the acquisition is complete” he added.

1414 Degrees, previously known as Latent Heat Storage, began developing the technology a decade ago in partnership with Adelaide-based engineering consultancy ammjohn, and the University of Adelaide. It began trading on the Australian Securities Exchange in September 2018 after raising $16.3 million as part of its IPO.

Dr Moriarty said the Aurora Solar Energy Project would be developed and financed in the subsidiary company, and 1414 Degrees would control and manage the Project.

“We’ve had a lot of interest from infrastructure and investment funds seeking to invest in the potential of our technology and this large solar farm will generate significant revenues while supporting the staged development of our large-scale energy storage technology,” he said. 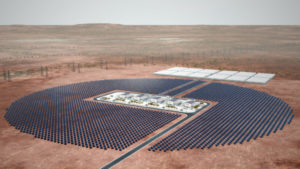 “The advanced status of this project is expected to result in early revenues from energy sales. We will avoid high capital requirements by staging the development.”

1414 Degrees proposes to offer its more than 3000 shareholders an entitlement to directly invest in units of the Aurora Solar Energy Project alongside the institutional funds.

South Australia leads the nation in the uptake of wind energy and rooftop solar with renewable sources accounting for more than 50 per cent of the electricity generated in the state.

This followed the closure of the state’s last coal-fired power station in 2016, which initially increased South Australia’s reliance on energy supplies from the eastern Australian states, particularly in times of peak demand.

South Australia is home to Tesla’s 100MW/129MWh battery, which became the “world’s largest lithium-ion battery” when it was installed at Neoen’s Hornsdale Wind Farm in December 2017. Neoen this month announced it would expand the battery by 50 per cent.

The Tesla battery has played a critical role in maintaining grid security during times of instability.