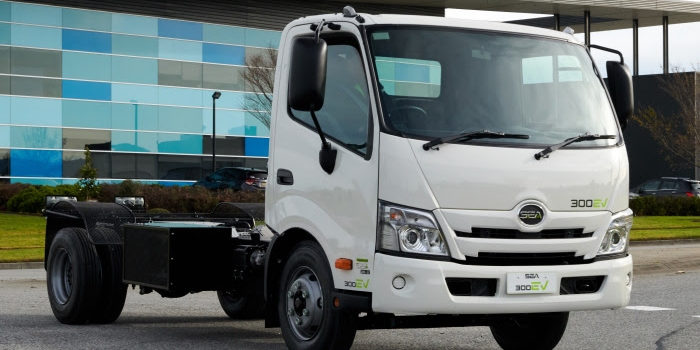 The first Australian-made SEA 300-85 electric truck has rolled off the production line in south-eastern Melbourne.

Rated to 8.5-tonnes, the truck is specified with a 138kWh battery driving a 1,500Nm all-electric motor.

Unladen, the combination has a potential range of up to 300km.

“It is the culmination of years of effort by the entire SEA Electric team dating back to 2012.

“Australian manufacturing and ingenuity is alive and well, especially so in the development of products in the EV space, with SEA Electric’s innovations game-changing for the transport industry.”

Constructed from a Semi Knocked Down (SKD) kit, the truck is finished with the latest SEA Electric badging and branding, its own compliance plate and full factory warranty.

The model lends itself to a variety of final applications, including dry freight, temperature-controlled freight, as an elevated working platform or a tipper for municipal use in a range of trims, according to Gillespie.

Gillespie said: “The response from the transport industry since the launch of our local volume production has been very heartening, and we are looking forward to passing many more milestones in the coming months.”

Grey said: “We’ve developed a transition plan to a low-carbon future and that includes reducing our reliance on diesel.

“Our SEA Electric truck is just one of the ways we’re driving towards net zero.”

SEA Electric is currently replicating the production techniques developed locally in Australia for overseas markets, including North America where it recently received its largest-ever order for 1.150 trucks.