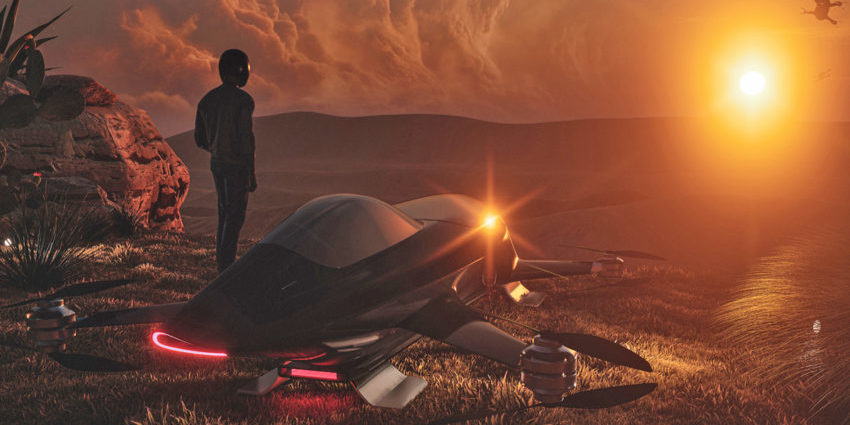 A South Australian company that is building a manned multicopter to compete in its flying electric car racing series has secured seed funding from leading technology venture capital firms.

Based in Adelaide, Alauda will use the investment to ramp up design and manufacture of its vehicle, which it aims to test with a pilot aboard before the end of the year.

Alauda also owns Airspeeder, the racing league that plans to host a flying car series at various global locations from as early as next year.

Alauda formed in 2015 and also has an office in London in close proximity to international motorsport bodies and global brands.

Founder Matt Pearson said the aim was to have the series up and running with all teams initially using the Alauda vehicle.

He said competition would drive the flying car industry forward, as it had done with motorsport and aviation 100 years ago.

“It’s pretty much what Formula E did to move very quickly and they built a billion-dollar-sport in about seven years,” Pearson said.

“They worked with a single manufacturer for the chassis and the powertrain and it was down to driver skill and a bit of luck for the first few seasons and then after the third season they started bringing in other constructors and manufacturers and opening up a bit.

“We think this is a great way to drive the industry forward and a fantastic way to prove out new technologies and create innovations that will go back into the autonomous vehicle and the air mobility industry as it matures.

“Henry Ford famously said motor racing was invented five minutes after the second car was built – and aviation was exactly the same.

“Now those two things are fusing I don’t see why it’s going to be so different for flying cars and certainly for tech development.”

The carbon fibre Alauda multicopter has four arms with two electric motors on each and weighs just 150kg. A collision avoidance system is being developed using a combination of radar, LiDAR and machine vision to protect pilots.

“The great thing about a multicopter is each electric motor is a single moving part so it’s a much simpler vehicle than a helicopter, which has thousands of moving parts and a single point of failure,” Pearson said.

“The safety systems we’re developing at Alauda are all around giving the pilot control but having the robotics system there to keep you safe.

“My dream is to be able to develop really powerful performance vehicles you can fly yourself that are easier than driving a car but the autonomous system is there to stop you getting in trouble and that’s where we get the dream of the Jetson’s right.”

Pearson is also Chief Operating Officer of Fleet Space Technologies, a nanosatellite communications company based across the road from Alauda’s technical facility in Adelaide’s western suburbs.

Adelaide is emerging as a Southern Hemisphere hub for the space industry and is home to major defence primes, a number of emerging space startups and the Australian Space Agency.

The South Australian capital is also home to Cohda Wireless, a global leader in collision avoidance systems for autonomous vehicles.

Pearson said having locations in Adelaide and London was a good mix for Alauda.

“There’s so much technology innovation happening at the moment in South Australia that it’s kind of the place to be and with the progressive UAV laws in Australia, sunny days and open desert it’s got the right mix of requirements for us,” he said.

“The home of international motorsport is London so that’s where the big sponsors and partners are and we want to be part of that as well so it’s important for us to have an international presence where we can get a seat at the table with a lot of global brands’ HQs.”

An autonomous prototype of Alauda’s Airspeeder debuted in England last year at the Goodwood Festival of Speed in July but crash landed in an empty field after flying erratically.

Further progress has been since made, including strengthening the vehicle’s monocoque chassis and survival cell.

Alauda originally planned to conduct manned testing in California’s Mojave Desert but travel restrictions around COVID-19 has it now hoping to make the most of South Australia’s stable climate and vast deserts for test flights later this year pending approval from Australia’s Civil Aviation Safety Authority.

“CASA has always been very progressive with its UAV regulations and a lot of international companies have come to Australia to do testing but this is a new thing for CASA to deal with and we’re working with them at the moment to figure it out,” Pearson said.

“It’s a really interesting proposition for the regulators because they are looking at certifying vehicles that begin their life unmanned, are piloted in the middle of their life and then end up autonomous with passengers. 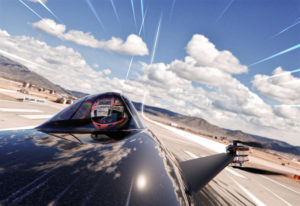 “Really focusing on safety systems is what eventually made Formula One so safe and making the carbon fibre monocoque really safe is a big part of what we’re doing at the moment apart from some of the fancier technologies around collision avoidance.

“We’re doing testing now on full-sized vehicles at this stage unmanned and throughout the year as that data feeds in we’re going to go to manned flights.”

The Airspeeder is being touted as having a top speed of about 200km/h and a battery life of 10-15 minutes, depending on how hard it is pushed.

Pearson said he was in talks with potential locations for rounds of the Airspeeder league in Asia, the Middle East, Europe and the United States.

He said races would be about 30 minutes of “high-speed 3-dimensional racing” and involve pit stops for battery changes.

“A lot of people are very interested in who’s going to host some of the first flying car races in the world and we think this is going to be an amazing way to showcase a commitment to future technologies and the electrification of our transport system.

“We’re also building a sport of this century for this century – built for social media, built to be consumed the way people are consuming content these days so it will be shorter races with sharp pit stops.”

Pearson would not say exactly how much had been raised in the seed funding round but hinted it was a “seven figure number” that had allowed the creation of the firm’s state-of-the-art technical base in Adelaide and his team to grow to 14 staff.

He said the investment represented a significant seed round ahead of an already planned Series A raise.

“We’re still pretty small but I say it’s about the right size for a racing garage.” 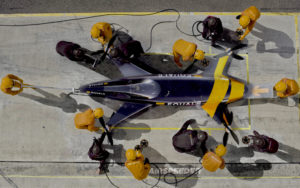 “We are inspired by Matt Pearson’s vision to drive innovation in a sector that promises to change mobility,” Findlay said.

“Electric flying car racing will drive awareness of a technology that will bring our communities together and answer the question of sustainable urban transport in the coming decades.”

Co-founder Andrea Gardiner said Pearson had an inspired vision of the future of “clean air” mobility.

“We are impressed with the early success of his route to early commercialisation through the creation of a flying car racing league,” Gardiner said.

“There is a clear global market for Airspeeder and Alauda and the founder has an outstanding track record as a successful entrepreneur.  We are proud to support the realisation of his bold vision of the future of mobility.”