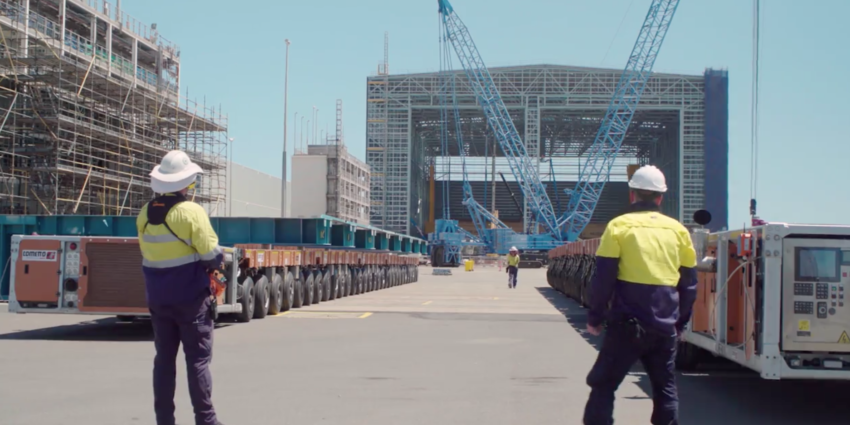 Shipbuilding in South Australia is proving a bright spark in the economy with the first new construction shed for the nation’s $35 billion Hunter Class Frigate program now ready for action.

Building 20 is part of the $500 million upgrade of the state’s Osborne shipyard and its handover to ASC Shipbuilding is now underway, keeping plans well on track for work on the nation’s nine anti-submarine warfare frigates to start this year.

ASC Shipbuilding director Jim Cuthill said five new sheds in the shipyard were being fitted with cutting-edge equipment and the site’s builders Australian Naval Infrastructure and Lend Lease are on track for a complete handover in July.

Meanwhile, design-based engineering work for the frigates was continuing.

“At the moment about 70 per cent of our workforce is still working from home and we haven’t really missed a beat with the work that we are doing,” Cuthill said.

“This is a program of national importance but it’s one that’s going to play a key role in terms of stimulating economic activity post COVID.”

Workers employed on the frigates project run by ASC Shipbuilding, a subsidiary of defence giant BAE Systems Australia, are now just over 600 with Cuthill saying this would be ramping up from July to hit about 1000 by the end of 2020.

Cuthill said Building 20 is where construction work for the frigates will begin, as the program kicks off with five prototype blocks of the ships being made in the first two years.

The planned build would see mainly Australian steel first enter the highly automated fabrication hall to be cut and welded into the 75 units that will make up each of the frigates.

Work then moves onto Building 21 on the site, the block outfit hall, where the units have piping, cable layers, heating ventilation and air conditioning added.

They are then moved to Building 18 for blasting and painting.

“There are high levels of control in temperature and humidity in that chamber,” Cuthill said.

“Once we actually paint those blocks we try and maintain that paint scheme right through the life of the ship.”

In a streamlined plan, the blocks are then shifted to the largest construction shed on site.

Building 22 soars above the nearby Port River, this structure is 170m long, about 80m high and about 50m long, and is where the blocks are fitted together to make the ships.

“First of all we do more outfitting on the blocks in this build, we put in accommodation and the interior outfit and we put in equipment,” Cuthill said.

They are then joined together and “if you went into the hall toward the end of the process you would basically see an entire ship inside except the top mast,” Cuthill said.

The almost completed frigates will be moved outside onto the slipway for the mast and combat system to be fitted before the ships are put into the water for testing.

And the last of three Air Warfare Destroyers built at Osborne was recently handed over to the Royal Australian Navy.

Australian Naval Infrastructure was established by the Federal Government to oversee overhauling the site at Osborne so it was ready for this next major project to build the Hunter Class Frigates.

General manager operations Paul Bates said once the current frigate build site was completed it would be handed over to ASC Shipbuilding.

And then his onsite workforce are moving further along at Osborne to build infrastructure to support the Future Submarine Program, where 12 Attack Class Submarines were expected to be built from 2024, creating thousands more jobs for South Australia.

Cuthill said Australia was ensuring there was a continuous ship build to sustain thousands of jobs and supply chain businesses across the nation, also ensuring long-term in-country skills.

The frigate project was expected to see worker numbers peak at 2400 in 2028.

“We’re developing an Australian industry, it is helping us in a space where we can design, build and sustain future warships and also support other opportunities for our supply chain in the future outside of the project,” Cuthill said.