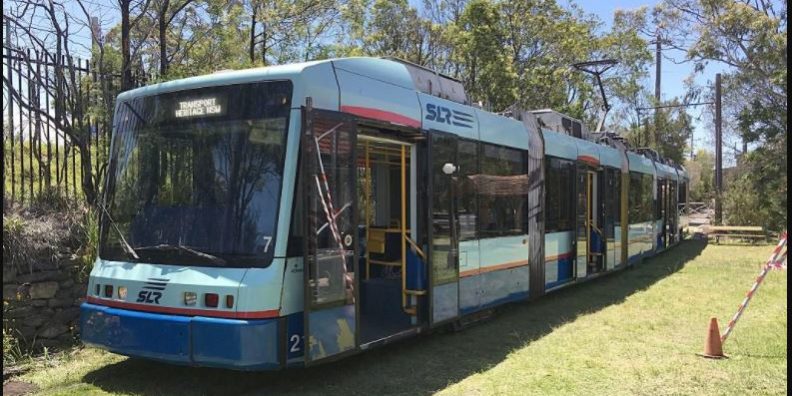 The idea that importing public transport rolling stock is somehow cheaper has been blown out of the water by Sydney’s recent disasters with trains that don’t fit the tunnels and trams that are cracking up, and let’s not forget imported ferries that don’t fit under bridges. Here Shane West forensically dissects the history of Sydney’s inner west low-floor trams…and finds ‘cheaper’ was never true, and threatens local industry and human capital destruction.

It is good to see some common sense returning.

The off-cuff comments by former NSW premier Gladys Berejiklian that NSW and Australia were not good at building trains is now being reassessed given the current massive blowouts and pardon the pun further derailments.

The state’s first modern light rail trams of the ABB designed hub geared wheel drives were built at the same time in Australia and Germany in 1997.

One was written off in an accident while the other six performed perfectly for 18 years.

The German built versions called the Variobahn of this world first flat floor design were ordered by the Finnish Government for Helsinki. The hub drives cracked and had many issues and Helsinki was contemplating tearing up the contract.

The D class German built trams for Melbourne in 2002 also developed cracks and in March 2016, Time Out Magazine rated the D-Class tram the worst on the Yarra Trams network. The reasons given were a low number of seats, the uncomfortableness of the seats, a loud screech when the doors open and close and poor ride quality.

What about quality, maintenance and economics? The seven Dandenong built Variotrams cost $25 million – great value and were greatly preferred by customers over their replacements the CAF Urbos 2s, which were unpopular with passengers and attracted complaints to NSW State Rail Authority. It starts to make the Australian built versions look very good.

With the current situation of the Sydney to Dulwich Hill light rail being possibly decommissioned for 18 months the refurbished, the Variotrams to still be running looks like it would have been a good option but unfortunately, they were scrapped in 2018.

A single Variotram has survived being leased to the Loftus tram museum. It is interesting to note that the same Dandenong tram builders under the Comeng title had sold trams to China which are still operating in Hong Kong.

All this suggests Federal and State procurement rules need to change.

NSW transport minister Andrew Constance claim that the trains Rotem Hyundai built in Korea would be 25 per cent cheaper than locally built trains now needs to be re-examined.

At the time there were complaints about the tender process which did not take into account even the basics of payroll tax losses or the internal economy multiplier effects, let alone the impact on security, advanced manufacturing and let’s not forget the human capital.

It is time to take stock- we have almost decimated our rail industry in the last decade.

Bradken’s who produced some the world’s largest bogie and wagon sets in Australia closed operation in 2017 unable to compete with two Chinese manufacturers who are wholly owned enterprises of the Chinese government.

Comteel in Newcastle who were part of the Arrium Moly-Cop group were sold off to American Industry Partners in 2016 after 100 years of rail building.

The UGL (Goninan’s) site just down the road in Newcastle also after 100 years of manufacturing was bought out by Spanish CIMIC and locomotive production due to unfavourable Government procurement policies all but ceased in 2017.

This loss of local rail manufacturing may also bring about the closure of the UGL rewinding facilities for electric motors, including the ability to build and maintain larger electrical windings nationally.

If the rewinding and AC- DC testing and commissioning facilities close, this will impact on rail, mining equipment, defence and our readiness and resilience to maintain large electric motors and generators right across our country will be impacted.

If Comsteel stops rail wheel production in Newcastle we lose our ability to produce the world’s best rail wheels and axles that utilise high tech micro alloying technology for the heaviest mineral rail wagons in the World.

State Government procurement could have helped create thousands of jobs by utilising our own steel and manufacturing trains locally, supporting our own industries. The NSW Government having sent $5 Billion offshore- has almost been the death knell to 100 years of rail manufacture in the Hunter.

Hopefully it can be resuscitated.

State and Federal governments need to work together and work a little harder to diversify our economy to maintain and grow local industry and create thousands of worthwhile long-term jobs by fostering our national rail manufacturing, steel and aluminium capabilities.

Time to get back to local manufacturing and value adding back into the vernacular of Labour and Liberal Governments.