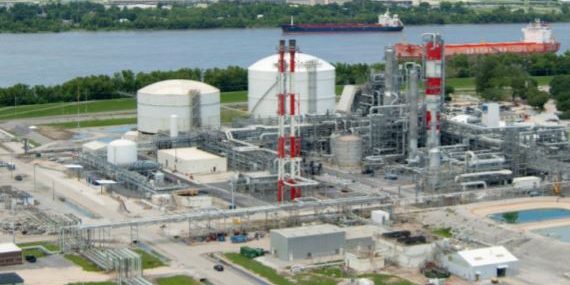 Chemicals and explosives business Incitec Pivot’s shares plunged 9.4 per cent this morning with news of further problems at its trouble-plagued Waggaman ammonia plant in the US (pictured).

The plant, one of a number of plant failures and natural disasters that have hit the company, was under repair until March 6 and started up through to March 17 when it was ‘brought down as a result of a dry gas seal failure and vibrations in the turbine on the induced draft fan’.

Investigations into the root cause of the latest failure are complete and repairs underway, with the cost of these further adverse impacts expected to be a $36 million reduction in earnings before interest and tax (EBIT) in FY21.

Production at the 800,000 tonne a year ammonia plant is expected to re-commence in mid-April.

The turnaround cost at the plant has been finalised at $80 million.

In recent times Incitec Pivot has had problems with ammonium nitrate plants in Louisiana, Missouri and Cheyenne, Wyoming which have now been resolved.

Other recent problems include a $60 million cost associated with a rail outage in Queensland, $16 million from a third party gas pipeline rupture in the US and $65 million from outages of its Waggaman and Phosphate Hill fertiliser plants.

However even more problems at Waggaman were revealed today to investors, who cut 27.5 cents from the share price by mid-morning when shares were selling for $2.64.

However subsequent metallurgical analysis revealed that poor workmanship of the original fabricated metal would likely prevent the repair from lasting until the next planned turnaround.

Replacement of the cooler will likely be required in the next 12-24 months, with an outage of three weeks expected in FY22 or FY23 to allow installation of a new cooler.