It might seem a small loss, but Treg’s closure is a sad day for manufacturing nonetheless 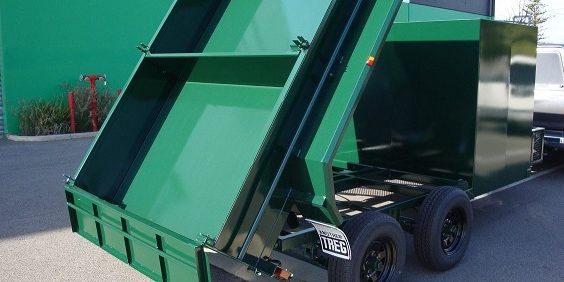 On Friday a small Adelaide manufacturer announced it was closing, unremarkable perhaps because it happens every day. But manufacturing is suffering a death by a thousand such cuts, argues Peter Roberts. We have to do something to change the fortunes of our SMEs who, like the little company profiled here – are doing it tough.

Australian Manufacturing Forum members in Adelaide have sent me a notice (pictured below) announcing the imminent closure of a much loved local manufacturer, Gordon J. Tregoning Pty Ltd, makers of Treg Trailers.

“It is a sad day,” one metalworking competitor told me on Friday, ironically on the last day of Australian Made Week.

I remember Treg trailers from my one (disastrously failed) attempt to reverse a 6×4 trailer when I was young, and even today the Treg name is commonly seen on mudflaps on our roads, and on critical components for caravans.

But times are tough and current directors Ian and Lisa Tregoning announced last week that the business would close on 30 June after 75 years.

“Many of our fellow manufacturers have made similar decisions in recent years.

“The closure of local industries and suppliers have severely depleted our service customer base…(and) manufacturing in Australia is no longer viable for our unique skill set and expertise.”

Ian told @AuManufacturing that the company had been losing money for several years, battered by low-cost competition from China.

“I kept it running really out of respect for my father and for some of the guys who have been working there for a very long time and who are nearing retirement age.

“But enough is enough.” 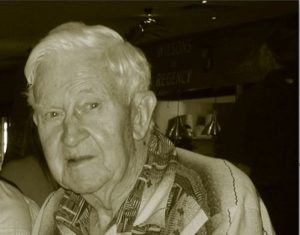 Gordon was a fitter and turner and after a time as a navy mechanic during the war, turned his hand to trailers when a friend asked him for one.

He must have been a remarkable bloke for over the years he manufactured all sorts of things – brick making machines, wine presses, pizza ovens, display and signage works, rainwater tanks, playground equipment, and machining for car makers and brewers, and rolling work for bus shelters, local sculptors, the Adelaide velodrome and the Australian Submarine Corporation.

In fact engineering was the company’s main business with trailers an important sideline.

However a string of engineering customers have closed in the past few years, including Mitsubishi, GMH and most recently SA Brewing.

The real killer of the business has been ‘cheap and nasty’ Chinese imports, some of which have been openly selling in Australia using – illegally – the Treg brand.

What made the Tregonings even more bitter was when a few years ago they sought to have some components of their famous coupling made in China to reduce their costs.

“Within a month of sending over the specifications, there on a Chinese website, they were offering Chinese made couplings for sale anywhere in the world.

“We began to get a lot of calls about these couplings, they were failing. They weren’t ours, they were knock offs, but it hurt our reputation.”

The 12 employees, down from a high of 32, at the Underdale, Adelaide factory are naturally shattered at the announcement, though one told me: “It was expected sometime, but perhaps not so soon.”

Ian said that he had been contacted by a number of companies interested in taking over the patents and other rights associated with making the Treg poly-block.

“I suspect you will still be able to buy an original Treg coupling in future – it is just not going to be made by Treg.”

Treg Trailers will hardly make a ripple when it closes, and no doubt will be replaced in the market by some standardised import.

You would wonder if anyone in Canberra will notice Treg’s demise, but they should, because it is companies like these, and familys like the Tregonings, that are the salt of the earth of Australia’s predominantly SME manufacturing sector.

While the focus is on defence, and space and medical devices, it is the Tregs that turn out the thousand and one basic, necessary products of an advanced economy, innovating and adapting to our unique market conditions and needs, and employing and training our young people. No-one else will do that for us.

Businesses like Treg are closing every day of the week – Australia’s manufacturing sector is suffering a death by a thousand cuts..

None are momentous at the time, but they continue to add up every day to a nation that despite the posturing of a series of prime ministers, continues to make less and less of the things it needs.

Until this terrible wastage at the grassroots stops, until the policies and financial support and availability of skills line up to see companies like Treg expanding and innovating again, Australia will continue to be a nation in decline. 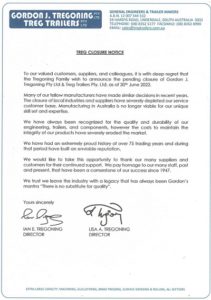