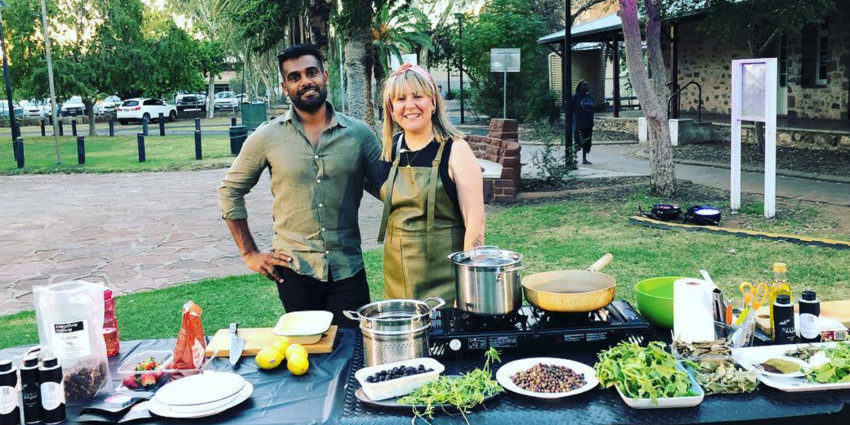 An Australian range of teas flavoured with native ingredients such as lemon myrtle, finger lime and ants is preparing for an international launch.

Co-founded by cook and food writer Rebecca Sullivan and artist and high school teacher Damien Coulthard, Warndu has sold its native teas, vinegars and oils in Australia since 2016.

But an increase in demand for Warndu products and a steady growth in overseas inquiries has convinced the set up distribution networks in the US, UK, Germany and Singapore.

Sullivan said there would also be an international shipping option on the company website by September.

“At the moment if someone wants a product sent internationally, we go and find out how much it costs and, if they’re happy to pay the postage, we’ll send it,” she said.

“Asian countries especially get what we do because they tend to eat for medicine anyway, so they get the medicinal properties of our teas.”

Sullivan will also travel to the US next month to build her food knowledge further after recently being named a 2019 Yale University World Fellow. Warndu is based in the Clare Valley, about 150km north of the South Australian capital Adelaide.

The range of loose leaf and brew bag teas feature ingredients such as finger limes from Byron Bay and river mint from South Australia.

Coulthard is from Adnyamathanha country in the Flinders Ranges region of South Australia and remains very connected to his heritage and culture.

Warndu means “good” in Adnyamathanha and reflects the brand’s aim of providing nutritious food that has a positive impact on people both physically and mentally.

In April, Sullivan and Coulthard launched their cookbook, Warndu Mai (Good Food), in a bid to make sustainable native ingredients part of Australian’s everyday diet. The cookbook was picked up by major department stores Big W and Target.

Sullivan said the consistent advocacy of well-known chefs as well as increased media exposure had contributed to a surge of interest in native Australian ingredients, paving the way for Warndu’s success.

“There’s amazing TV shows that are championing aboriginal culture and there’s lots of aboriginals on the big screen now. I think it’s just got to the pointy end of the stick where we’ve ended up in the space where it’s no longer trendy, it’s becoming normal,” she said.

“It’s been the culmination of lots of things. Big chefs that have been championing native ingredients for a long time.”

Since opening in 2013, Orana has been at the forefront of the Australian native food movement. The Orana Foundation plays a key role in assisting indigenous communities by stimulating enterprise and supporting the development and demand for native Australian food supplies.

The foundation also documents Australian plants used as food by Indigenous communities for their nutritional properties, toxicity and potential uses.

So far it has profiled 1500 ingredients for their nutritional properties. The database is due to open to the public in a few months. Sullivan said she hoped Warndu could begin integrating native foods from other indigenous cultures in the future.

She said the US trip from August until December give her the opportunity to collaborate with experts in her field from across the globe.

“I’ve reached out to lots of different departments including American indigenous departments to have conversations to see if there’s any potential collaboration with Warndu and native Americans,” she said.

“I’m going to be writing another book about climate change and food and farming, because we bought a farm. I’m also going to work with the Yale Food Initiative. I’m doing some work on campus food and sustainability on campus, so it will still be in and around sustainability and food.

“But my big project while I’m there is to interview all of my food farming heroes in the US.”

Sullivan is one of 16 people selected for the annual program, which includes an open data innovator from China, a Nigerian Olympian and a Chilean National Geographic environmental activist.