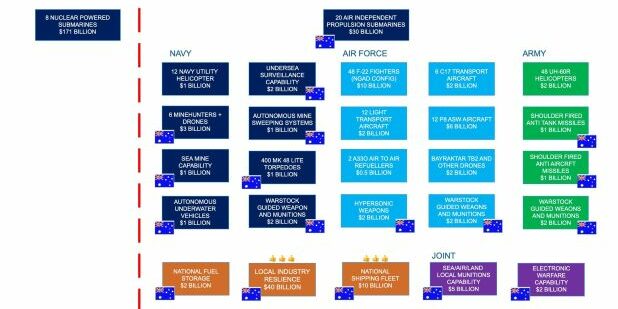 Former senator Rex Patrick has released a list of defence equipment and capabilities that could be bought by Australia in place of spending upwards of $170 billion to buy a fleet of nuclear submarines.

“The opportunity cost for the AUKUS nuclear sub program is too high. There is so much more we can do with $170 billion.”

Patrick listed alternative purchases including numerous helicopters and beefed up weapons stocks for each of the three services, $2 billion worth of drones, $2 billion for hypersonic weapons, F22 jet aircraft and missile systems (main picture).

Patrick said the Prime Minister Anthony Albanese ‘was going to scrap pandemic leave payments as unaffordable, yet continue with a bankrupting $170 billion nuclear sub program that won’t see a first boat delivered until 2040.

‘He’s properly reversed his decisions on one, but not on the other.’

Patrick’s suggestions were met with a variety of responses on Twitter.

‘William’ replied: “Are the subs silent, long range, able to deliver nuclear warheads if we are under threat of a nuclear attack? Are they fast enough?

“China has nuclear weapons, we must match that with a sea based attack. I know it sounds nuts but deterrence works.”

To which ‘Dale’ replied: “It sounds nuts because it is nuts. Nuclear weapons will only make us a nuclear target.”

Manufacturing news briefs — stories you might have missed
August 12, 2022
Advertisement