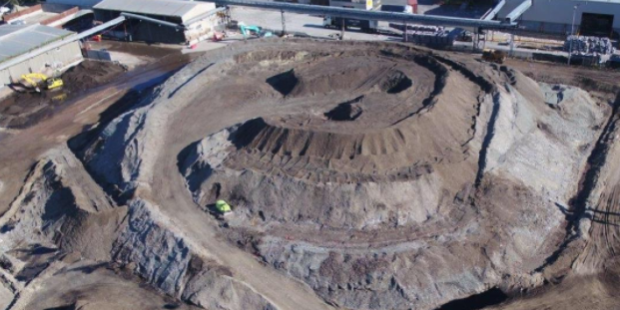 After an eight month operation led by the Victorian Environment Protection Authority, the last truckload of contaminated glass waste from Glass Recovery Services (GRS) has been removed from a site in Melbourne for recycling. Here, Aristos Karavias of waste to resources business Repurpose It takes up the story.

According to the Environment Protection Authority (EPA) over 124,00 tonnes of waste has been removed from a recycling plant in Coolaroo in northern Melbourne.

Repurpose It partnered with Downer, Symal and the EPA to convert almost half of this waste, made up of contaminated glass, into a valuable resource.

In October 2019, Glass Recovery Services (GRS) in Coolaroo was taken over by the EPA to remediate the site and remove the risk it posed to public health – glass at the site became unsuitable for use and according to the EPA, a fire risk.

With a commitment to protecting Victoria’s resources for future generations by making landfills a thing of the past, Repurpose It accepted 45,000 tonnes of contaminated glass from GRS.

Symal, a civil construction company, were engaged by the EPA for the onsite works and to facilitate the transport of waste glass to Repurpose It’s Epping facility.

According to Symal, independent advice from various parties identified high temperatures throughout the entire stockpile which presented an immediate risk to the environment. Symal were tasked to remove waste, including high temperature materials from the site.

Repurpose It provided a disposal alternative to landfill, ensuring that the heat risk was not passed on, and the waste was recycled into high value materials.

Repurpose It’s state-of-the-art construction and demolition washing plant was able to process the glass into high value sand replacement. What was considered waste can be converted into valuable manufacturing resources for Downer, reducing Downer’s reliance on virgin sand and diverting waste from landfill.

Repurpose It’s 150-acre facility is designed to receive and recover waste from recycling operations including waste glass, as well as from construction projects across road and rail infrastructure, tunnelling operations and contaminated land remediation.

In early 2020, Downer received the first delivery of glass processed by Repurpose It. Prior to this, Downer has not received recycled glass as a material for 18 months due to the contamination.

Downer will continue to utilise the high value washed glass sand in their asphalt facility in Bayswater to produce asphalt.

Repurpose It’s $8.5 million construction and demolition washing plant was launched as the first of its kind in Australia, in partnership with Sustainability Victoria. Per hour, the plant processes up to 150 tonnes of untreatable waste materials that would otherwise end up in landfill.

Aristos Karavias is head of operations and major projects for waste to resources business Repurpose It.