Rocketery win to University of Sydney 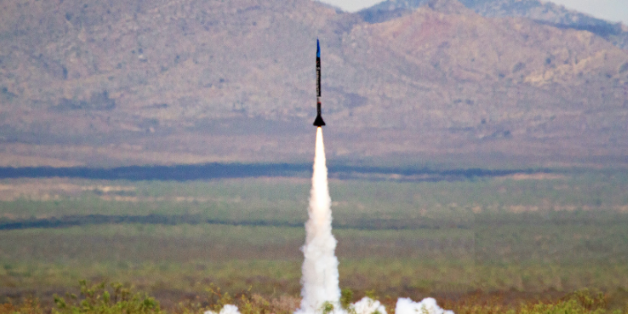 The University of Sydney Rocketry Team has been announced as the overall winner of the Spaceport America Cup intercollegiate rocketry competition, held annually in New Mexico.

Competing against 97 student teams from around the globe the University of Sydney team placed first in three categories – winning the overall competition and taking out first place for the launch of their 30,000 feet commercial-off-the-shelf rocket Bluewren and first place for the design of space debris capture payload Callistemon.

Bluewren was constructed from a custom-designed and manufactured carbon fibre airframe and uses a commercial solid propellant to achieve speeds 1.7 times the speed of sound.

Bluewren soared to a height of 29,933 feet – roughly nine kilometres – over the New Mexico desert before successfully deploying both its parachutes, landing safely and intact three kilometres from the launch site.

Spaceport America Cup judges commended the University of Sydney team for their sportsmanship, camaraderie, rocket launch and design. The team’s payload Callistemon was praised for its performance during the launch and for being an innovative solution to the growing problem of space junk.

The team’s Executive Director, Bachelor of Engineering and Science student Alison Lockley said: “This has been the most incredible and rewarding experience and I could not be prouder.

“We have overcome some significant challenges to get here and it speaks to the tenacity and dedication of every person on my team that we have been able to achieve this.”

Payload director Bhavesh Balaji said Callistemon was the culmination of novel research conducted by the payload team into the use of computer vision for the dynamic targeting of space debris.

After a two-year pandemic hiatus, in June the team flew to the US to compete at the competition, making it their second Spaceport America Cup launch since winning the 10,000 feet competition with their rocket Silvereye in 2019.

In 2021 Spaceport America Cup held a virtual competition, with the Sydney team winning silver and bronze for their rocket, Firetail, and payload, Tetratheca.

“However, perhaps most importantly, they have learnt the value of both leadership and team-work – indispensable skills in the aerospace industry.”