Rubber made from waste opens door to sustainable production 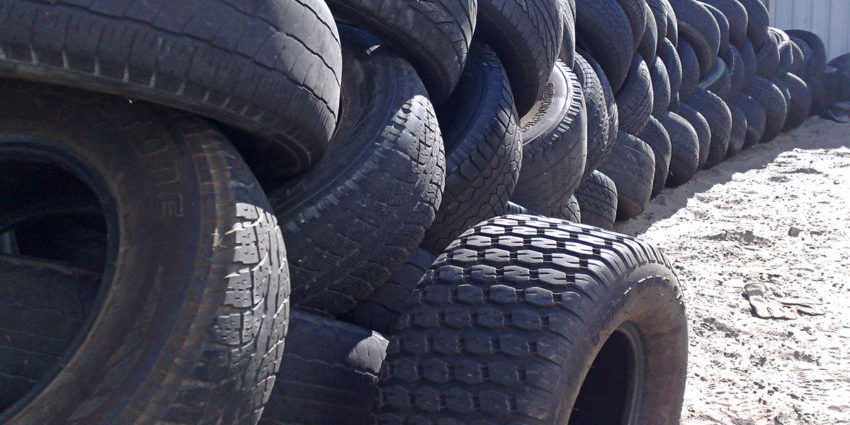 A recyclable rubber material made from waste has been developed by a team of researchers spearheaded in South Australia.

The new material is also able to be easily repaired, offering a sustainable solution to rubber manufacturing, which has traditionally been resource intensive and resulted in huge amounts of landfill at end of life.

Flinders University Associate Professor Justin Chalker has been developing materials made from waste cooking oil and sulphur for several years with other products including a polymer that can that can soak up oil spills and a mercury and cyanide-free method of precious metal extraction and recovery.

The research findings have been published this month in the international journal Chemical Science.

The rubber material is a copolymerisation of cheap and plentiful waste products; sulphur, canola cooking oil and dicyclopentadiene (DCPD) from petroleum refining and, unlike traditional rubber, has the ability to be completely repaired.

“The most obvious use was to have materials that can be repaired and that’s quite important for rubber in particular because the vast majority of rubber that’s made, not just for tyres but for any use, is not recycled,” he said.

“This rubber has some of the very same material properties but has the ability to reprocess because in the backbone we have these dynamic chemical bonds that can break and reform with the right stimulus or the right catalyst that we add to the surface.

“It is exciting to see how the underlying chemistry of these materials has such wide potential in recycling, next-generation adhesives, and additive manufacturing.”

Each year in Australia, more than 30 million tyres, each containing about 7kg of rubber, end up in landfill, are stockpiled, illegally dumped or have an unknown fate.

The new rubber product can utilise an amine catalyst to trigger a reaction that enables the rubber to self-repair, within minutes in some cases and at room temperature.

It can also be used as a latent adhesive, where it bonds to the surface of another piece of rubber when the amine catalyst is applied. The researchers say the catalyst is stronger than many commercial glues.

Rubber bricks made out of the polymer can be chemically joined by applying the catalyst but are not adhesive without it.

Associate Professor Chalker said the rubber could be customised to almost any format and the adhesive bond was strong enough to be used as a welding replacement, where welding materials were not available. 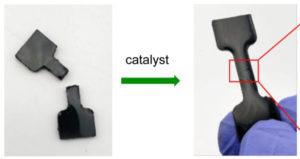 “It just looks like normal black rubber, it is not sticky, it’s very smooth, and if you put those two pieces together absolutely nothing happens,” he said.

“What sets this rubber apart, is the fact that it is completely recyclable, it can be ground up and then made into a different shape using the catalyst.

“It is quite an advanced notion in terms of recycling things that aren’t normally able to be recycled.

“It is an important step forward to making sustainable rubber materials like tyres that are otherwise disregarded.”

The rubber is also resistant to water, salt and corrosion.

Although not ready for commercialisation, Associate Professor Chalker said related polymers previously developed by his team were already being manufactured in South Australia.

“The chemistry will capture people’s attention and imagination and we’ll be able to adapt it for commercial application and are excited for different polymeric materials to be made in Adelaide.”