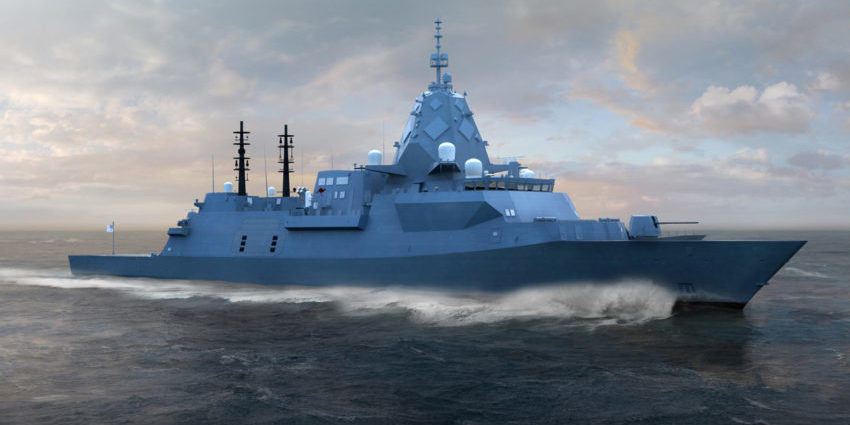 The ramping up of shipbuilding programs in Adelaide this year is providing an employment lifeline for South Australia as the state’s looks for ways to tackle boost jobs growth post coronavirus.

Nine anti-submarine warfare frigates will be built by ASC Shipbuilding at the Osborne Naval Shipyard in Adelaide in what is being described as the largest surface ship project in Australia’s defence history.

The $35 billion project is expected to generate thousands of additional jobs in South Australia and interstate at defence primes and smaller component manufacturers, which are being contracted to supply parts and expertise.

It comes at an opportune time as Australian Bureau of Statistics labour force figures for March, released last week, show South Australia’s seasonally adjusted jobless rate climbed to 6.2 per cent, up from its already nation-topping February rate of 5.8 per cent.

The full impact of coronavirus job cuts are not likely to show up until April’s figures are released next month.

South Australia is pivotal in Australia’s $90 billion National Naval Shipbuilding Enterprise. The last of three Air Warfare Destroyers were handed over to the Commonwealth in a ceremony at Osborne last month where construction of Offshore Patrol Vessels is well underway.

Osborne has been the home of the Air Warfare Destroyer project for more than a decade and was also where six Collins Class submarines were built for the Royal Australian Navy and have undergone ongoing sustainment.

It is also expected to be the construction site for 12 Attack Class Submarines from 2024, creating thousands more jobs.

ASC Shipbuilding has become a subsidiary of BAE Systems throughout the Hunter Frigate build process before ownership is returned to the Commonwealth at the completion of the project.

ASC Shipbuilding Managing Director Craig Lockhart said while 70 per cent of Osborne’s staff were working from home and social distancing measures were in place, shipbuilding had been able to continue in Adelaide throughout the COVID-19 pandemic.

“We’re still presenting all the design-based engineering outputs that we need to deliver against the schedule so I think the positive is that defence has kept going when lots of other industries have unfortunately had to stop,” he said.

“We’ll be better placed than most sectors to come out of this because it’s largely been progress as normal, we haven’t been that affected by what has been going on.

“The Hunter program is well placed to be front and centre in South Australia and lots of the other states when we come out of this stage we’re in at the moment and we start to think about how we generate wealth and jobs.

A $535 million upgrade to the Osborne shipyard is almost complete, creating a world-class digital shipyard, which will be key to delivering the frigate program.

Australian Naval Infrastructure began the Osborne South Shipyard project in 2018 and has employed more than 550 people on-site and a further 150 off-site in a range of trades and professions including metal fabrication, design consultants and project managers.

ASC Shipbuilding this month partnered with BAE Systems and Flinders University to launch Australia’s first digital shipbuilding course, aimed at upskilling the remaining AWD workforce with the latest industry 4.0 technologies and techniques that will benefit the Hunter program and future shipbuilding projects in the state.

The Hunter Class Frigates are based on the Type 26 Global Ship, which BAE Systems is building for the United Kingdom’s Royal Navy in Scotland.

The first of more than 40 ASC shipbuilding staff seconded to BAE’s Scotland shipyards as part of a knowledge transfer are beginning to return to South Australia after up to 18 months in the UK learning how to build the ships.

The two-year first building of five test blocks at Osborne is beginning in December this year with building of the first frigate expected to commence in 2022.

Lockhart said the digital shipyard and highly skilled workforce at Osborne meant there would likely be future export opportunities beyond the nine Hunter Class frigates.

“Part of why we’re putting so much effort into the knowledge transfer and learning how these ships have been designed and built in the UK and bringing that back to Australia is that we want to be front and centre of the Commonwealth Government’s future shipbuilding plans in both design and manufacture,” he said.

“There’s a whole range of opportunities and it’s really for other governments to decide but we know there’s a frigate replacement program in Japan, we know the Kiwis will buy ships at some point … so these are all opportunities for us to play some part.

“I expect ASC to be positioned to harness the world-class facilities we’ll have at Osborne and with that design capability based on Hunter to take a big slice of that action.”

The frigate program alone is expected to create 1000 apprentice and graduate jobs throughout the program’s life across a range of white and blue collar disciplines.

Set up by the Federal Government and headquartered in Adelaide, the Naval Shipbuilding College’s role is to ensure Australia has the right mix of skilled workers to fuel the continuous build. It has so far partnered with 21 education providers to deliver accredited training tailored for the sector. 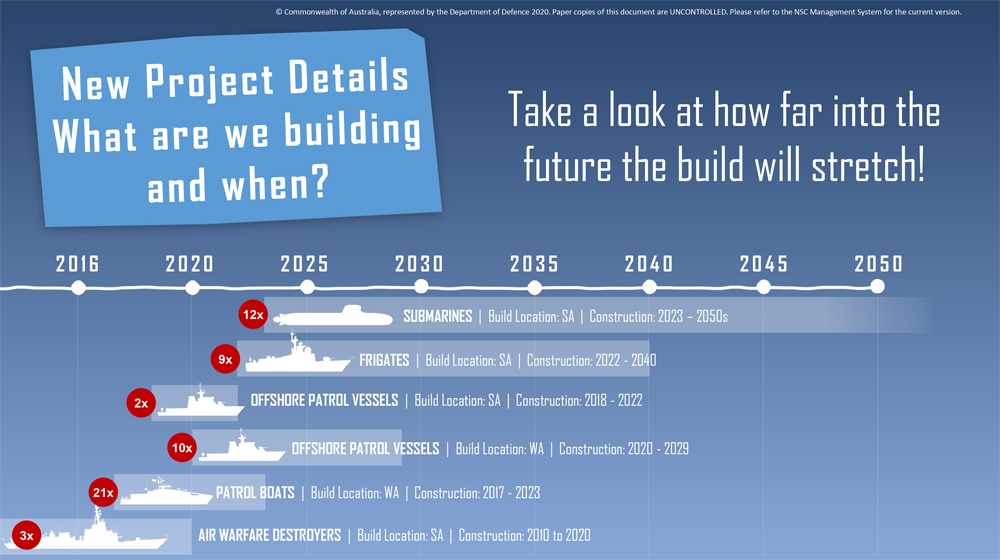 A workforce register has also been set up by the shipbuilding college as a first step for people looking to establish a career in the industry. More than 2000 people have so far registered an interest while prospective employees are also being encouraged to contact BAE Systems Australia directly.

“It’s really unfortunate this whole COVID-19 thing, it’s a desperate situation for everyone who has lost their jobs but I think anyone who has any engineering skills they can easily translate into the shipbuilding sector should be looking to the likes of ASC Shipbuilding and Naval Group because we’re all in the market for good quality people.

“It’s a 30-year program so there will be lots of jobs but equally there will be billions of Australian dollars flowing through BAE Systems and ASC into that supply chain.”

“We can really offer people a stable career across their whole working life through the multitude of programs that are occurring in shipbuilding,” he said.

“They’re not what you might expect – they’re very hi-tech jobs working on the most advanced products anywhere on the planet.

“If we look at the submarines and the frigates, they are some of the most complex machines man will build in the next decade and there’s a great opportunity for male and female students to get the training they need to be job ready and come into this arena.”

The University of South Australia has this month begun running industry workshops involving defence primes, SMEs and government representatives to gain insights into the impact of COVID-19 on the local industry.

“In South Australia we have hundreds of these defence SMEs and they are all now really starting to look at all discretionary spend and very much focusing on their immediate projects,” he said.

“They are stretching the rubber band already but it will become their supply chains, their cashflow, their staffing that will all be stretched the longer it goes on.”

Opie said the defence industry would be better placed than many other sectors to help drive the state’s economy out of the COVID-19 crisis.

Featured picture: Nine Hunter Class Frigates will be built in Adelaide by a workforce of more than 2400. (BAE Systems)