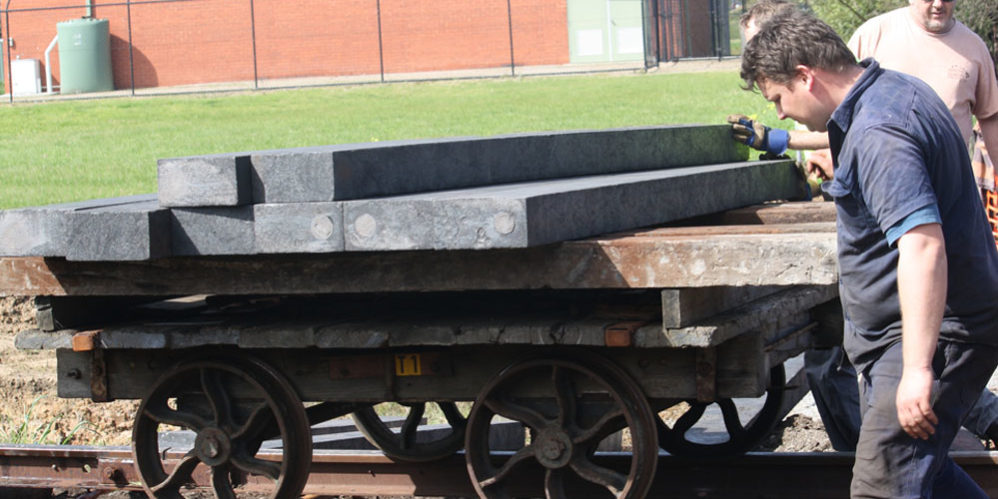 Stephen Webster’s company has been developing composite railway sleepers from recycled plastic since 2014. He tells Brent Balinski that the development path hasn’t been easy, and that cooperation among companies and government will be essential if circular economy initiatives are going to flourish.

Integrated Recycling is a small team on the cusp of recycling large amounts of plastic in infrastructure.

They have trials of their recycled railway sleepers underway at locations including Richmond in inner-city Melbourne, and at the V/Line Wyndham Vale stabling facility. Another two Queensland Rail sites could eventually see Integrated effectively “establish a new industry” that would both use huge amounts of waste material and create greatly improved sleepers.

General manager Stephen Webster insists that it’s been a highly collaborative effort to get where they are.

“Rail is new to us, and it’s not a language or knowledge that we really know… and we have worked closely with two groups: the Institute of Railway Technology of Monash, and a heavy engineering consultancy called Strategic Connections Group and their principal Alan Burns,” Webster tells @AuManufacturing.

“And together with Russell Trevaskis with his rail engineering knowledge we’ve had the benefit of all their experience supporting what we’ve done.”

Webster’s company of about 15 is part of Integrated Packaging, a subsidiary of listed Pro-Pac Packaging (ASX:PPG). Their Mildura factory has been running since 2010. Core business is landscaping products, including bollards, boardwalks and decking.

The loss of a major chunk of work in 2014 making reused plastic cylinders for films turned their minds to new business. About that time, Trevaskis – a retired railway engineer – got in touch to ask if they’d give recycled sleepers for tourism and heritage railways a shot. Operators were troubled by a shortage of timber, and by maintenance issues due to sweating their ageing assets. 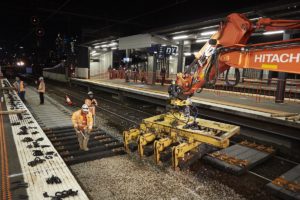 This work, supported by Public Transport Victoria, led to the development of design and testing guidelines by Monash’s IRT for sleepers in such environments. The composite sleepers, with a 50-year design life and resistance to rot and termites, are now installed at “seven or eight” heritage railways in Victoria and WA, including Puffing Billy Railway in the Dandenong Ranges.

The Duratrack sleepers are made of 85 per cent recycled material, and contain polystyrene and agricultural plastic, pipe used in the mining industry, wood fibres and colouring.

The reclamation figures are impressive: 64 tonnes of reused plastic per each kilometre of track laid using Integrated’s product. When you consider the amount of track in Australia – 36,000 kilometres – then the landfill-reducing potential of recycled composite sleepers, if they can gain acceptance, gets highly interesting.

Queensland Rail is currently looking to replace 700,000 timber sleepers in its network over five years. Webster’s company is among three undergoing in-track testing of their product, and the only one using recycled material. 150 of their sleepers were installed late last year at two sites, between Helidon and Gatton and Chinchilla and Miles.

One site was inspected in April, and follow-up visits are scheduled for both sites in September and October. So far, it’s no news, and that’s good news.

“What’s showing in-track is that they’re running about a quarter of a million tonnes of freight over this site each month,” says Webster.

“So, after 12 months, 3 million tons of traffic will have gone over them. And that will help validate the performance of the sleepers.”

The trials are expected to finish by the end of next year.

“If I was QR I’d want to have more than one supplier of these materials, so we’ve banked on getting an order of 50,000 sleepers a year over five years,” says Webster.

“To supply 250,000 would effectively establish a new industry. We would have to invest significantly on the back of an order from QR in our Duratrack production line, and we anticipate that we would put that in our Mildura facility. We would at least double our workforce up there to start making 1,000 sleepers a week.

“The Duratrack area of interest is still small in what we are doing, and it’s an area that we expect to be commercially producing next year.”

Webster was a finance and banking lawyer, before leaving in 1993 to become a partner in gourmet pie manufacturer Boscastle, heading up Storm Sustainability and then being asked by the CEO of Integrated Packaging to build up their recycled plastic business. Back then, it was a time when plastic recycling was “more a novelty.” 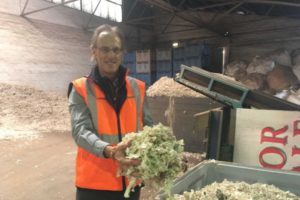 “The Duratrack area of interest is still small in what we are doing, and it’s an area that we expect to be commercially producing next year” – Stephen Webster (Picture: ABC Regional/Kellie Hollingworth)

He believes that the success of a circular economy – a topic that has exploded in popularity since he began his current role in 2010 – needs a range of things to succeed.

Secondly, collaboration – as has been required in the development of a product for which no standards exist – is also vital.

Thirdly, government support is necessary. This includes procurement requirements for products with verified Australian content, as well as support to develop fit-for-purpose products for any safety-conscious industry. In Webster’s case, this has allowed his business to engage with Monash’s engineers to develop product guidelines.

“It does need a fair bit of science around it, and we’ve taken a difficult area in that it’s a very safety-conscious environment,” he says.

“A railway engineer is like a bridge engineer: ‘it ain’t gonna fail in my lifetime.’ They’re conservative in their approach to ensure that the product that is being innovated can work and perform as they want.”

Wind generators could be made in WA
August 7, 2020

Manufacturing news briefs – stories you might have missed
August 6, 2020

New data from @NCVER shows the number of school students undertaking vocational education and training (VET) as part of their secondary education has risen by 2.2 per cent to 235,800.
https://www.aumanufacturing.com.au/vet-in-schools-students-on-the-rise
#auspol #training #skills