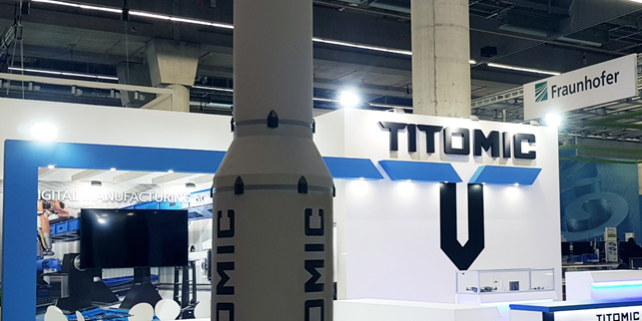 The rocket was made in Melbourne using the TKF 9000, the world’s largest and fastest metal additive manufacturing system that utilises the CSIRO-derived Titomic kinetic fusion (TKF) process.

The rocket is a scaled version of the Gilmour Space’s ERIS-S rocket that is 27 metres and was completed at Titomic’s Melbourne production bureau in just 27.6 hours.

The printing of the 3D rocket was revealed exclusively in @AuManufacturing news yesterday.

The reveal came only days after The Economist speculated that one day someone would succeed in printing a rocket – and apparently Titomic has.

“But with the development of new supply chain of titanium powder and Australia’s significant mineral sand resources of about 280 million tonnes of titanium, Titomic is at the forefront of advancing technology for future sustainability of the Earth’s resources and reducing carbon emissions for global manufacturing.”

Titomic has the capability to build full a scale space rocket in 165 hours utilising economical high-performance titanium and other super alloys that can also be applied to defence applications for ballistic missiles.

Until now high-profile aerospace organisations such as SpaceX have used stainless steel 301, a material that is twice the weight and a quarter the strength of titanium.