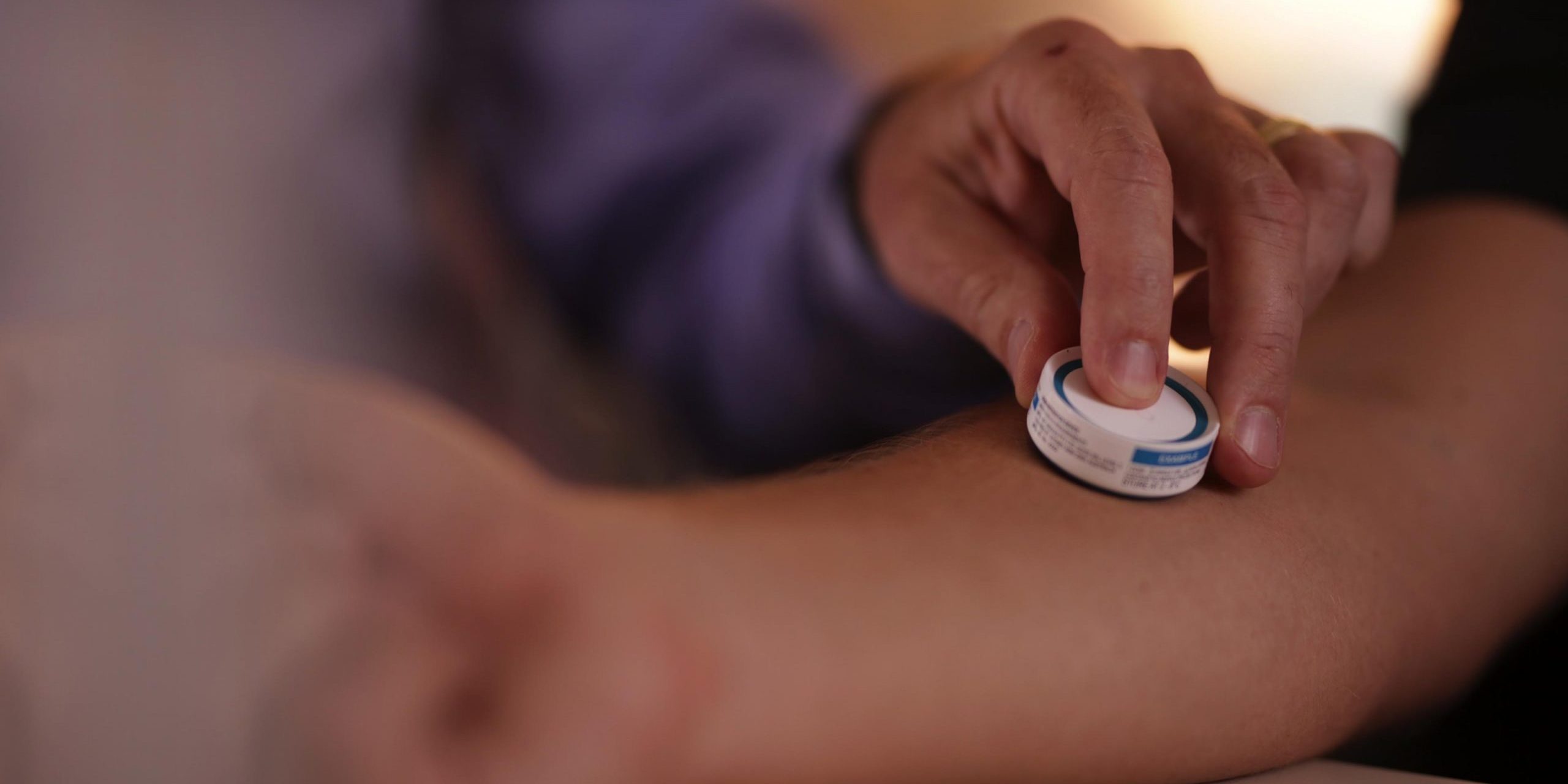 Vaxxas has long been viewed as an Australian medtech company with a great amount of promise.

The University of Queensland spinout was formed in 2011 to commercialise a needle micro-array concept used to painlessly administer vaccines, developed by Professor Mark Kendall — a rocket-scientist-turned-medical device inventor — and his team.

According to Vaxxas, the concept takes advantage of the high amount of immune cells in skin, meaning six times the response of antibodies for a given dose. Other selling points for its under-development HD-MAP delivery platform (formerly known as Nanopatch) include the possibility of self-administering dry vaccines by a patient, meaning lower costs, and fewer requirements around a cold chain and training to deliver medicine.
@AuManufacturing spoke to Dr Angus Foster, the company’s Chief Development and Operations Manager, about the continuing journey to volume production for this Australian invention, new facilities for the company, Covid-19-related R&D, and upcoming clinical trials at the Sunshine Coast.
@AuManufacturing: It seems to have been an eventful couple of weeks, with the Translational Research Institute expansion funding announcement and the results that you’ve got some coverage for.

We’ve been based at the TRI since about 2015. We moved Vaxxas operations across here from University of Queensland and I think, as we discussed previously, we needed to access the clean rooms that are needed for manufacturing products, for early stage clinical studies — phase one studies. We’ve been using the clean rooms, labs and offices here since that time. It’s helped us build the datasets and publish clinical studies and prove the concept, if you like, from an immunology perspective.

We were very fortunate, last year there was support from the Queensland state government for our next facility. It’s still on track. This is the Northshore R&D manufacturing hub for Vaxxas. We aim to move in there midway through next year. It’s got offices for about 150 people with about 70 there at the moment. It gives us some room to continue to expand, allows us to take our laboratory operations, R&D work across there. And also really importantly, I think as we discussed last time, the aim would be to get the TGA in to review the manufacturing and laboratory facility, to make sure that it’s fit for manufacture and supply of material into later-stage clinical studies. There’s a couple of large clean rooms that are going into the facility. That would enable us to make products for phase two, potentially phase three, and even potentially early-stage commercial supplies if it made sense to do that. So that’s obviously on the vaccine/product combination, then on the device side, on the applicator or the patch itself, it’s got space for sort of manufacturing activities: injection moulding and device manufacture as well. So we could make devices from that facility, which would then potentially be sold to partner companies who are putting the vaccine onto that combination and taking it to market.

It’s been purpose-built for us. We helped design it. We’re involved in the specification, the build, the layout, and obviously making sure we’ve got expertise involved, and it was going to meet the requirements of the pharmaceutical manufacturing facility for the vaccines.

Then the TMI as well. One of the reasons we’re going into this new facility is I think where we are now is not suited to the next stage of development. For the Queensland state government to recognise that gap and support another facility, where space can be leased, companies can go into, as they come out of the TRI and take a product through to later stage studies, build value and grow those businesses here in Australia, I think is really exciting. So I think it’s good to be associated with it.

@AuManufacturing: That is where you will be commissioning the pilot line you announced last year?

Yes. The new manufacturing pilot line, which will be used to make products to go into phase three studies, will go into the Vaxxas Northshore facility and enable us to produce products with a process that is very, very similar to the final commercial process.

The timing for that? We’re still sort of designing the pilot line. And there is still a bit of a funding gap. The facility is the facility, but the pilot line itself is not a cheap piece of equipment to design, build and validate. So it’s probably around $15 million Australian dollars for that pilot line. So we’re looking for potential partners to help fund that as well, whether that’s pharma, philanthropic or even government funding opportunities to get that line up as soon as possible. That’s the next stage.

@AuManufacturing: You mentioned last time that the TRI would be unsuited to the next phase of clinical trials.

That’s right. It’s just not set up for that type of thing. It’s great to have a purpose-built facility, but the TMI facilities for the drug substance, for the manufacturing of vaccines, I think will be really well-suited for those types of scaled up operations.

The other news is that we had some research out of University of Queensland with our technology, with Dr David Muller’s research on a Covid-19 vaccine candidate, Hexapro, the spike protein. We got some great data in a preclinical model showing that there’s the potential in a model to get decent antibody responses after one dose. Especially if you combine the Hexapro with an adjuvant, which sort of increases immunogenicity of the vaccine. And he also showed that it was generating antibody neutralising responses against different variants of the sars-cov-2 virus as well, which is very topical at the moment. Then he took it into a study where he looked at the protective effect and that same model. So preventing infection of the animals through use of that vaccine, and got some really strong data in that model, showing complete protection of the animals to exposure to a variety of different variants, after two doses with or without the adjuvant. So it’s a lovely set of what you call early-stage preclinical data, showing the patch may have a real role to play in improving responses to covid-19 vaccine. He compared the performance with the patch technology versus injection by intradermal application, which is just an injection just underneath the skin. And the patch performed much, much better than the ID injection in the study in the studies he ran.

For us it means that we’d like to look to fund that and turn it into a clinical program. I guess if it was a single dose and you combine that with potentially all the benefits of a patch to deliver the technology — ease of use, hopefully thermal stability, possibly getting around some of these challenges we’ve got in storage of the MRNA vaccines. And he got good data — I think he went out to at least at least a week and 40 degrees centigrade and got good recovery of that spike protein in that period of time.

@AuManufacturing: How long would the gap be between that and clinical trials at the different phases?

Then from that point, it’s hard to predict really how long it takes you to get to market. We’ve been driven by the scalability of our technology and how that would sit within that scenario. But having seen the rapid authorisation or emergency use authorisation of vaccines around the world for Covid over the past 12 months, you could move pretty quickly through the clinical program. As long as the technology was at a scale which could be progressed at that pace as well. I think that would be our challenge.

@AuManufacturing: I have heard others say that getting into clinical trials in Australia is comparatively smooth, but manufacturing for clinical application is the really difficult bit. Has that been your experience?

Yeah, that’s why we do it ourselves! And why we moved into TRI and got started doing our own manufacturing, there was no way of really finding a CMO [contract manufacturing organisation] in Australia that could do that work. And right back in 2012, 2013, we’re looking at potential CMOs in Australia to do the specialist activities needed to produce materials for phase one studies. There are a couple of small, small companies. They could have potentially done it, but it wouldn’t have been easy. We’re a bit of a unique example because of the specific technology we need to manufacture our products. But I think our challenge remains, even if you’re trying to produce a liquid in a vial for needle and syringe administration, where do you do that? Where do you scale up your vaccine or drug substance manufacturing to make it suitable for use in clinical studies and meet all the requirements that you need to do to do that? I think that is a gap and why things like investment in the TMI, I think that’s where it helps get into that process of being able to do that.

I think the other gap is making sure we have a workforce capability to do those manufacturing activities. For example, here we work with the TRI, with some of the researchers in the building, train them in Good Manufacturing Practice, they help run our cleanroom operations, help produce clinical batches and just give researchers exposure to what it takes to produce products that we need to go to clinical studies, and the level of quality oversight, documentation and process development you need to do so.

I think there’s been a gap. And I think that’s where obviously the government can play a role in helping foster that for companies and groups to be able to move into that area. Because it’s difficult recruiting people into Vaxxas that have good vaccine development experience. There are a lot of very, very capable young scientists, engineers and researchers coming out of universities all throughout Australia but really there is a gap in terms of people having a good industry experience and know what they need to do when they join a company and start working in a different type of environment.

@AuManufacturing: What other clinical work are you focussed on at the moment?

We have got one that was in the media a week or so ago, which has been run up at the Sunshine Coast University Clinical Trials centre. That’s a study we’re doing with the measles and rubella vaccine. That vaccine is widely available to people in Australia, but still getting people access to that in some parts of the world is still very challenging for reasons of cold chain complexity and skilled healthcare workers to administer it. This is an opportunity to participate in a clinical trial which can really ultimately improve access to a vaccine for low and middle income countries. That study is starting its recruiting at the moment at the USC clinical centre. We are trying in a short period of time to get as many people in.