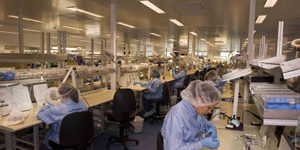 Plans for the future of Australia’s minimum wage have emerged as a key election issue for business in the upcoming federal election.

Opposition leader Bill Shorten has identified slow wages growth as a key issue, listing a series of steps he would take to kick start wages growth, especially for the lowest paid.

Shorten would change the rules used by the Fair Work Commission to lift the minimum wage, currently $18.93 an hour, but would not mandate a living wage of 60% of the median wage.

Shorten’s stand has emboldened the ACTU to agitate for a six per cent boost to minimum wages.

The government has hit back at Labor by linking wages to jobs, making the argument that rapid rises in wages would result in lay offs.

Employer groups have lined up strongly behind the government.

“A minimum wage increase of six per cent would be a sure-fire way of destroying jobs, harming businesses, and threatening Australia’s long period of economic growth,” he said.

“Inflation is currently running at 1.8 per cent per annum, and many businesses are struggling to cope with uncertain demand, intense competition and rising costs of energy.

“An increase of this magnitude would hurt lower paid workers, whose job security would be markedly reduced.”

The Fair Work Commission has also been cautious in recent years of rapid rises in the minimum, suggesting that legislation may be needed if Shorten is to keep his promise to low paid workers.

However he has latched onto a vein of unease in the community over falling living standards as wages have not kept up with inflation.

And there is envy at work also as since mid-2016 corporate profits have risen 43 per cent while wages improved by just eight per cent.

Whether wages are a defining issue of the coming election remains to be seen, but both sides are mounting powerful arguments.