‘Who are the actual recyclers?’ asks Australian plastics pioneer 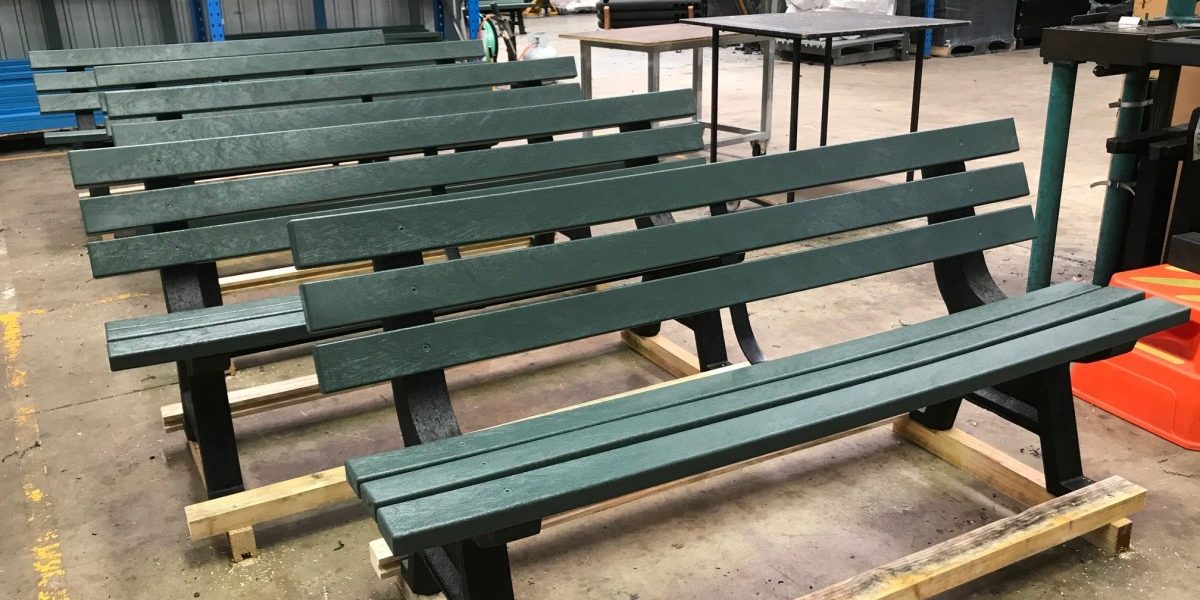 In 1992, Mark Yates founded Replas, which makes outdoor products including bollards, decking and furniture, and recycles up to 4,000 tonnes of plastic a year. Yates tells Brent Balinski what to make of the current discussion we’re having around recycling, and about a recent project making handplanes out of reclaimed marine litter.

@AuManufacturing: What is the size of Replas, please? What do you look like in terms of employees, sites, volumes etc.?

Mark Yates: We’ve got three sites all based in Victoria. We have some direct sales employees all up the east coast and agents everywhere else, also in New Zealand. We directly employee over 50 people. We recycle around 3,500 to 4,000 tonnes per annum of mixed plastic waste.

@AuManufacturing: Do you source from an organisation like REDcycle or from a number of different places?

Mark Yates: Lots of different places, because we blend all the recycled material together to give us the properties we need for the products we make. REDcycle material is predominantly low-density plastics. LD has got a lower softening point, so it doesn’t stand up to hot sunny days as well. If you made a bench out of LD plastic, it’d sag in the sun, so you need to blend and modify it.

@AuManufacturing: You mentioned it’s an exciting time for you. Could you us about how you’ve seen people’s attitudes towards reusing plastic change over the years?

Mark Yates: We’ve been doing it since before the first kerbside collections came in for recycling. Back when we started, and it’s exactly the same today, everyone concentrated on collecting the material but don’t concentrate on the end markets. Up until recently that’s all worked because the end market was China or throughout Asia. Now that that’s stopped, people are finally realising that if we want to make recycling work, we have to go to the end and actually use the material in recycled products. That’s probably what’s changed very recently, a lot of councils and government bodies are realising that they have to change their procurement policies to definitely include recycled content products. They’ve always been there in procurement policies, but there’s been no accountability. It’s always been a hard slog to actually sell recycled products. Not because they’re dearer, because if their whole-of-life cost is taken into account, they end up cheaper in the long run. It’s just change: no-one likes change.

@AuManufacturing: I was also wanting to get an idea about some of the innovations behind your company’s products. I’ve read that you’re quite unique in the way you blend plastics and not many places can do that in the way that you do.

Mark Yates: When I started the company years ago, I didn’t even know plastics were recyclable, so I wasn’t scared to try things, mixing different polymers and whatever. I’d just try things and test to see what came out. I’ve got no chemical background or anything like that. I’m electrical-based by background. That’s been our biggest asset. We didn’t know things wouldn’t work, so I developed machinery that could mould the plastic, which is fairly unique. We designed the machines to suit the material, but normally you design the material to suit the machines. We build all our own machinery to make the products we make and there’s various types depending on the product. Some of the products are eight metres long and 500 kilos in weight. Others are just a few kilograms, so totally different machinery’s required through the range of products we have. Basically, where we differ is we do mix the polymers. We source material that’s basically diverted from landfills. It’s already contaminated with paper or multi-polymers because the markets we tackle use traditionally inexpensive products like timber, concrete, and that sort of thing.

We need to keep our manufacturing and material costs down as low as possible. Plus, the power taken to recycle these products has to be as minimal as possible too. We’re flat out always introducing power-saving methods. We probably use around 25 per cent of the power that it takes to make a virgin material into a product, so that’s a big advantage. Basically, we’re sustainable right across the board. We look at every area of the company to ensure that we are doing the right thing and also that our business is sustainable.

@AuManufacturing: What can and what can’t you process in terms of different plastics?

Mark Yates: We target mainly polyolefins, which if you go back the numbers, I suppose it’s twos, fives, and others – some styrenes and whatever. The stuff we specifically don’t target is single polymers, stuff that can be recycled back into the same polymer, because that’s higher on the recycling hierarchy. Other things we don’t target are PET. It doesn’t matter if it’s in our products, but it’s a much higher melting point, so it’ll just go in as a discrete article and not part of the mix, which isn’t a problem. PVC is definitely a no because that degrades under the temperatures we run at, so PVC turns into an acid when it degrades and it’s not a good thing to have operators standing around machines that run PVC at high temperatures. The other engineering types of plastics, they’re all fine. We don’t target them, but we end up getting a lot of engineered nylons and PETs from films in the mix, especially nowadays because multi-layer films are becoming more predominant. 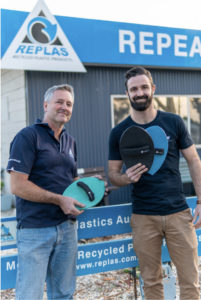 @AuManufacturing: Another thing that’s gotten a lot of traction in the last few years is the idea of a circular economy. A lot of people are saying it’s worth pursuing, but we need to do a few things before we get there. Tell me what needs to happen in your view.

Mark Yates: I believe we’re finally on the right track to a circular economy. Government procurement, looking at recycled products, will create the pull through. The supply is there, even though it’s, in inverted commas, “collapsing” at the moment-that doesn’t matter. All the infrastructure’s there and industry will catch up. Issues at the moment are with getting machinery to process plastics because the whole world has the same problem. The whole world is waking up. For example, we ordered a machine nine months ago – it’s still two months away from arriving – to increase our production capacity. I think probably the biggest drawback of the whole system is that everyone puts their hands up and says they’re a recycler. The trucks that run around to pick up the recyclables at kerbside, they say they’re the recyclers. The MRFs say they’re the recyclers, the traders say they’re the recyclers, even the manufacturers say they’re recyclers. The true recyclers are the people who purchase recycled products. The emphasis has all been in the wrong area. The traders are just that, traders. The MRFs are logistics. The trucking companies are logistics. You do get washed out in the green. There’s a lot of greenwashing who the actual recyclers are.

I don’t even believe we’re the recyclers. We happen to use recycled polymers as our feedstock. The true recyclers who don’t get the mention are the people who purchase.

I think that the media attention and everything is going to push the circular economy right in our face. There’s huge issues with the volume of plastic being produced. It’s going up and up exponentially. The trade war between the US and China has put a tariff on plastics. Now, the US have got an excess of plastics, so that’s going to force the virgin price down. And people who look at these things on price alone are not even going to look at recycled polymer, because it will become more expensive than virgin, because once you turn on these huge plants that produce plastics, you don’t turn them off. You’ve just got to get rid of the material. That’s been an issue with the oil price being so low, too. There’s been a lot of pressures on recycling, on stopping recycling, basically because the alternative’s so cheap.

@AuManufacturing: Earlier you mentioned the work with WAW Handplanes on a product for bodysurfing, and I think that’s worth hearing more about. Tell me about the origins of that at the Plasticity event and how it’s progressed.

Mark Yates: The project went together surprisingly well because Rikki Gilbey from WAW Handplanes backed his idea with money. He invested in a die. We did a prototype die, just out of aluminum and did some sample products. He modified the products, tested the products, came back with a CAD drawing of the product that he wanted, and then basically invested 20 grand in that die, which is a big investment for a one-man band. Once Rikki put his hand in his pocket and invested for the die, it put pressure on me to come up with the goods [laughs]. Between the two of us, we sorted out a supply through Eco Barge Clean Seas in Queensland. The girls up there do a great job cleaning up the beaches on the Whitsundays. They’ve been dying to get rid of their plastic. Currently, it’s a very time-consuming, labour-intensive process. They wash the plastic by hand, they chop it up with the Schruder [a type of extruder], which is more an educational tool. It’s not really for processing big volumes. We paid money for their material to cover a lot of the cost. It still won’t cover all their costs to get the material to us.

What we want to do now and what I’m working on at the moment is developing some – not quite industrial, not quite domestic machinery. Something that slots in with the price range for the girls to be able to process this plastic to a form that we need easily. If we pay them the extra price for the material, it will be viable and they’ll make money on it. If we can get that model working, that means that it can be rolled out a lot more.

@AuManufacturing: That first run was 1000 of those handplanes?

Mark Yates: Yes. We made 1000 in the first run. They’re going quite well, considering it’s the middle of winter in most of Australia.

The major launch will be around September or so. We’re doing another run shortly. The girls are just finalising the material up in the Whitsundays, or up at Airlie Beach, at the moment. Once we get that, we’ll do another batch of 1000. Another thing to note: Rikki also sources the rubber components, they’re made out of a natural rubber. I believe the Velcro is from recycled nylon. He’s followed it right through, which is great to see that he has looked at the whole thing, not just the plastic in the handplanes.