Why So Hollow? Australia’s Defence Industry Middle and what to do about it 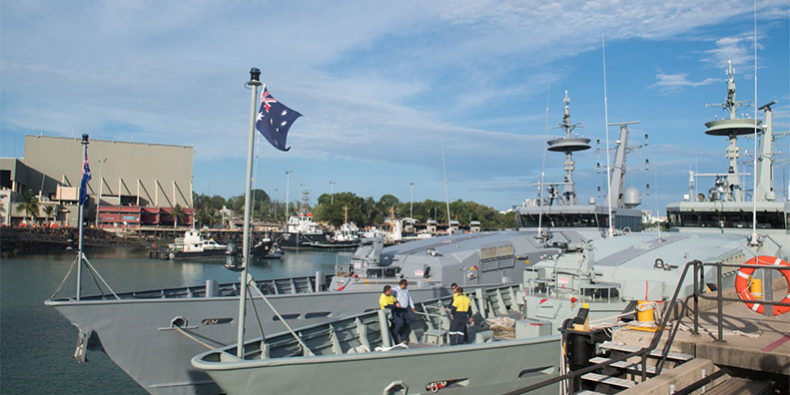 Australia’s defence industry sector has an odd shape. Medium size companies are rare. We’ve a strong top and a large bottom – but why so hollow in the middle?

Australia has a dozen global Primes at the top of the tree, we see them listed each year in the ADM Top 40 with revenues between $500m and $1.2B per anum. Looking at their products and services, they tend to each have carriage of a set of defence assets. They might build/assemble an asset, they might sustain an asset, sometimes they might do both. The asset could be a class of ship, a tank, an airframe, a building or an IT network.

At the other end of the spectrum Australian defence industry has tens of thousands of small companies, normally responsible for the manufacture/assembly/sustainment of one or few components of these defence assets. These small businesses might have revenues of $1-5m AUD, have a mix of defence and commercial clients. However they seldom export (if they do, it’s under the aegis of a sponsoring Prime).

Only a few medium size companies break clear of the ‘$50m revenue barrier’. They typically do something different, they edge into the realm of ‘system integration’. This means they take responsibility for a designing and manufacturing the system from the sub-components components, which is then integrated by the Prime into the asset, for example the drive train (system) of a the Hawkei vehicle (asset). Sometimes small businesses group together to create a similar outcome. When this occurs, we see a medium size company break from the pack of small companies and produce a systems business with perhaps $100m of revenue, 200+ employees, local IP and exports. Good stuff!

Why are Medium size companies important?

Our local defence industry seems to be getting along well now, so it’s reasonable to ask what would improve if we did have more defence mediums.

We think there are two reasons more would be better. First, Mediums are a potential sovereign hedge against the risk that global primes, who are each juggling the competing interests of the nations they operate from, or have deep cultural and historical roots with. There are famous examples of technology being withheld, or sustainment arrangements spurned, when international politics did not align. The ability of Australia to act independently increases when strong Mediums hold IP and knowhow that renders us less dependent on other nations.

The second reason is economic, strong mediums employ more people, are able to more effectively diversify to increase business resilience, and are able to invest and innovate in conjunction with evolving ADF needs and requirements. Smalls have less capacity, and primes have to balance needs across the globe. Mediums should be ‘just right’ when it comes to listening and responding to the needs of Australia’s defence and national security forces.

Perhaps today’s hollowness is a function of yesterday’s policy

One view is that the current Australian marketplace looks like this because it’s the legacy of a local model with historically flexible policies on the importance of sovereignty and the value of local content. Other countries have been strong on this, where Australia has perhaps been less clear.

What Figure 1 shows is where you have clear policy on sovereignty parameters you get strong mediums, but when you don’t, you don’t. Australia is missing that cadre of medium companies that traditionally act as the system/sub-system integrators as a result.  In other countries system integrators provide solutions to primes by pulling together many components into a systems. For example pumps, valves and chillers into a naval platform Heating, Ventilation and Air-Conditioning (HVAC) sub-system.

Small Australian businesses at the bottom have found it difficult to scale into medium businesses in Australia historically because (continuing the example) the HVAC components they support on one asset (class of ship) are different to the HVAC components on our disparate ~12 other naval assets – and we have just purchased three new supply chains on French submarines, UK frigates and German patrol vessels – thereby extending the challenge.

An additional reason defence small business finds it difficult to scale is because the Original Equipment Manufacturer (OEM) for one asset is generally unhappy about the small business having competing products from another OEM alongside theirs in the same workshop. This is an Intellectual Property protection issue for the OEMs. How can any business build scale when faced with such barriers?

How do we create medium size businesses in the defence market? We see four possible ‘SME Scaling Pathways’ a business might navigate.

In this scenario we see a pathway whereby the defence customer wants a locally customised platform, but the Australian domestic market is not big enough for a global prime to stand up capability. A variation might be that a system needs ‘Australianisation’ – for instance living quarters in a ship – and this is more easily performed locally (e.g. Taylor Brothers accommodation spaces work on AWD, OPV and potentially HUNTER).

A less common version of this is where the prime is let down by its legacy overseas supply chain, and an Australian small is asked to step up. In this instances we see the Australian small as not-initially-preferred, but the small exploits the opportunity. A feature of this pathway is that the small may in time come into competition with the prime, particularly as the prime looks down into the supply chain and see a small business growing and creating scale that changes the economics of the original buy/make decision.  When walking pathway 1 a medium company’s prime customer can be their biggest competitor.

In this scenario an Australian product emerges via local R&D and defence seed funding as a world class standalone asset or system. The CEA radar suite, Daramont systems, or the EOS remote weapons systems might be considered scaled examples. It’s doesn’t have to be a product, we could see it occur as a service too.

This scenario is perhaps new to Australia but it is well-trodden by other nations in the form of local content programs or equivalents.  This pathway commonly starts as a second source program from the global primes to meet AIC requirements, but then scales into a meaningful role across a global product suite. Australian examples of this are still emerging but you could start to consider Cablex on the MRH90 program.

A relative weakness of Australian AIC versus other countries local content programs is that we are yet to establish an assurance step, to challenge primes and smalls to evidence the promised AIC effect post contract award. There are always apparently compelling reasons to mitigate cost and schedule risk by repatriating AIC packages back to the OEM home nation legacy supply chain. Evidencing why, and showing how that gap will be recovered elsewhere, is not a strong element of today’s system.

Primes have made the point that SMEs should collaborate on research and development with the Primes and universities. SMEs can become embedded in primes supply chains by joining this R&D journey and creating solutions along the way. In this scenario government has a critical role to play in emphasising AIC, NGTF and DIH as part of financing these R&D projects, enabling small business to access opportunities. There has been good success with this strategy when government influence and R&D funding is aligned. The Wedgetail project and the Hawkei projects are perhaps better examples.

Note the JSF program where Australia paid to play, is a hybrid of these models and is considered a benchmark program. The success of the JSF program has directly led to a level of scaling for Ferra, Lovitt, HTA, Marand and Varley to name a few.

When you look across these four pathways you can see some commonality. All require strong political leadership, and all require a champion driving the interests of defence industry (advocates) with the capacity to step in, to flag issues and to compel a response. Right now we seem to have elements of these special ingredients in place via our federal and state investments – in aggregate they have started to deliver outcomes we’ve seldom experienced as a sector. Clearly continuity under the next Government will be important.

A call to action

So how do we create more Middle Sized businesses? As we sit today, this article argues for three actions.

First, hold primes to the AIC plans they tendered and then were contracted to deliver.  If the Australian government is “paying to play”, we should expect tangible outcomes. We need to continue to push on our largest programs including LAND400, SEA5000 and SEA1000 to deliver promised Australian small business opportunities. These programs have sufficient design work, scale and export potential to start small business on pathway 2, 3 and 4 concurrently – increasing the chances of building more mediums.

Second, assist small business to be ‘scaling ready’ and globally integrated so that future export sales can be captured. The CDIC defence ready framework and Export Strategies are foundations for this work, however continuity across future terms of government is critical.

And finally, continue to use vigorous political support to champion emerging defence small business. This works in defence industry. This could include increased use of our defence force personnel who are often our best advocates when engaging with their colleagues in other allied defence forces. Through that we could make defence industry an alliance issue, not a just an industrial one.

This article has been republished with the author’s permission. The original version can be seen here.