Why the Australia-France submarine deal collapse was predictable 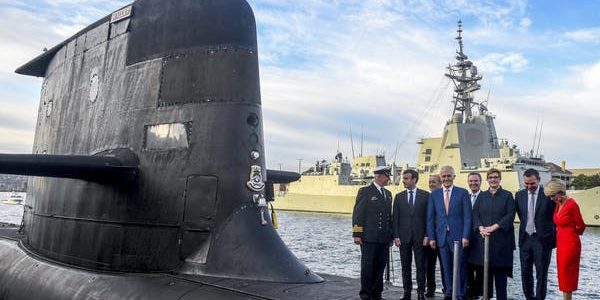 Australia’s unilateral cancellation of its contract to purchase French submarines and sign up for the AUKUS security pact constitutes a slap in the face for French diplomacy – variously described as a “stab in the back” and a “betrayal” by French diplomats.

Though Paris may be shocked by this turn of events, it was somewhat foreseeable, for several historical, cultural and diplomatic reasons.

Under this “contract of the century”, agreed to between Paris and Canberra in 2016, France was to provide Australia with diesel-electric Barracuda submarines for a total of €34 billion (A$55 billion) over a 25-year period.

For France, the aim was to develop a partnership with the largest nation in the South Pacific, one that should have sealed a close and lasting agreement for half a century, thus reinforcing its diplomatic and military network in an area of great strategic interest.

While this plan may have been both judicious (because it proposed a third diplomatic path for the region, freed from the Sino-American stranglehold) and ambitious (because it gave France and Europe a renewed presence in the Indo-Pacific region), there were nonetheless near insurmountable weaknesses in the French position that led to the failure of this collaboration.

With US or against US

Let’s be clear: the alliance proposed by France, while laudable, was nonetheless unusual.

Rising tensions with China over the past three years have brought Australia back into the American fold in a lasting way.

It should be remembered the United States has controlled and monitored Oceania since 1945. It has a network of military bases throughout the region, territories of its own, long-standing political associations and even its own state – Hawaii.

Taking advantage of a relative decline in the US presence in the Pacific under the Obama administration (when Joe Biden was vice-president), China has considerably hardened its expansionist policy in the area, which in turn has prompted a US reversal over the past three years.

This is where Australia comes in. The US had an interest in seeing Canberra cancel its contract with France and replace it with one with Washington — thus ensuring American control over a fleet of submarines they are likely to build themselves, despite what Prime Minister Scott Morrison is saying.

The United States is thus returning to the doctrine of “with us or against us” initiated by then-President George Bush in 2001. As such, it can no longer tolerate a third way in the Pacific.

This inflexibility can only lead to an escalation of tensions between Washington and Beijing, with Australia further increasing those tensions by choosing to side with the US.

The cancellation of the Australian contract with Naval Group, while brutal, was therefore not totally unexpected given Australia’s historical connection with the US, especially since Canberra had expressed its dissatisfaction to Paris on several occasions.

In fact, the perception in France of a reversal of Australia’s strategy is misled. AUKUS is a coherent move for Australia, in line with 200 years of Australian diplomatic tradition. It doesn’t mean, however, that it is a good move or a safe one.

Australian diplomacy is based on the doctrine of “great and powerful friends”. Until 1942, when the Statute of Westminster was ratified by the Australian parliament, the country’s diplomatic decisions were largely taken by or in collaboration with London.

Since 1945, these same decisions have been made slightly more independently, but often in agreement with Washington.

Australia followed the US into Korea, Vietnam, Iraq — in 1990 then again in 2003 — and Afghanistan. These modest contingents have allowed the United States to disguise its actions as being part of international coalitions.

How could Paris think it could overturn this loyalty, and reverse contemporary Australia’s deeply anchored colonial mentality?

France’s military and diplomatic project with Australia reflected a misunderstanding of what the Australians see as the main issues in the Indo-Pacific. France wants to maintain peace in the region, while Australia rightly or wrongly believes that war may well happen between China and Taiwan — and thus between China and the US, to whom Australia would lend its support.

For France, sovereignty is the alpha and omega of all international action, in a Gaullist tradition shared across the entire French political spectrum.

Post-colonial Australia has never been truly sovereign in the way the French understand this notion. Nor does it want to be, because what matters to Australians is not so much sovereignty as security.

In this respect, France has neither the scope nor the military capabilities of the United States to attach Australia to its Indo-Pacific policy.

The dispossession of Aboriginal lands and the geographical situation of Australia as a settler state in Asia has long led to a widespread sense of the country being under siege.

Since 1788, white Australia has feared incursions by the French, the Russians, the Japanese and finally China.

But is anyone truly interested in taking over Australia? Aren’t we big-noting ourselves in thinking that we matter to others?

This complex considerably weakens the possibility of Australia becoming a non-aligned, autonomous nation. Australia seeks protection above all, even if it means enraging allies whom it transforms into adversaries, while further antagonising China.

An island in search of a protector

History will tell whether Australia has made the right choice in tearing up its deal with France and joining AUKUS. In the meantime, Canberra is clearly isolating itself in the Pacific, having crossed a point of no return by making its own weapons interchangable with those of the US army.

Australia has only ever moved between one influence and another. Canberra has never gone it alone, knowing it does not carry much weight on the international stage.

However, and this is what seems aberrant and incomprehensible in the eyes of Paris, nor does it wish to give itself the means to develop its own autonomous defence systems and diplomacy.

Paradoxically, and beyond the nationalist rhetoric, Canberra seems incapable of forming its own independent destiny in the 21st century.

On the contrary, Australia still sees itself as an island in search of a protector, and in its eyes, France cannot take this role between China and the United States. It is therefore a lack of self-confidence, a lack of resources and, above all, a lack of investment and development of its own strategic industries that condemned Australia to inevitably backtrack on of its deal with France.

Will history repeat itself?

If Australia doesn’t develop its own subs now, history is bound to repeat itself. Contracts took years to be negotiated with Sweden for the Collins-class submarines in the 1980s, the same problem that can be observed today.

In 40 years, a new tender will need to be reissued for yet another fleet, creating the same delays and problems we have already twice experienced. But the Morrison government won’t be there to face them. That situation is simply unsustainable.

It might be time for Australia to invest in its own future, with defence programs headed by Australians for Australians, thus enabling us to be a truly sovereign nation that doesn’t need to be dragged along in other countries’ rivalries. But for this, we require truly ambitious leaders and considerable investments in the education and defence sectors.

Lastly, it might also be time to put the nuclear question on the table for a referendum. One of the worst aspects of AUKUS is the lack of consultation with all Australians.

Nuclear propulsion for submarines is likely to be used as a backdoor to move Australia toward a nuclear future. Going nuclear — or not — is one of the most important questions for Australians to answer to in the 21st century, both for defence and to curb carbon emissions.