Wire work: where Australian researchers are looking to improve WAM

Wire arc-based additive manufacturing goes back to the 1990s, but is only starting to realise some of its commercial potential.

Adelaide-based AML3D is one of the global leaders in commercialising this technique, which uses a combination of software, robotics and wire arc welding as a heat source, melting wire and depositing it, layer by layer, to build up large shapes. They call their patented process WAM (wire additive manufacturing.)

Among its regular announcements of late — including work on new alloys, record-breaking giant parts, composites involving novel nanomaterials and more — have been sales of machines to local universities.

This month RMIT shared the news that it would acquire an Arcemy machine, complementing a large stock of existing metal printing units of various kinds in its Advanced Manufacturing Precinct, and with an expectation that the companies would collaborate on “R&D across a number of metal alloy grades for post doctorate research, education and industry related applications.”

@AuManufacturing spoke to the university’s Professor Milan Brandt, Technical Director of the AMP, and Senior Industry Fellow Alex Kingsbury about the acquisition and what future R&D into wire arc AM would aim to investigate.

@AuManufacturing: How does WAM fit in with and complement other the additive manufacturing varieties at your centre?

Milan Brandt: We’re very much focussed on 3D printing. It’s part of our DNA over the last ten years at AMP. We’re probably one of the largest 3D printing teaching and research facilities, with metal and polymer printers and all the high-end CNC machining.

Where we want to go in terms of research — we did a bit of soul-searching last year and came up with a strategic plan for our activities. And considering the landscape has changed over the last ten years — there were very few research facilities in Australia, and even fewer commercial facilities and there are a number of commercial operators. You’ve got your Amaeros, your Amigas, SPEE3D, Aurora in WA. And lots of acquisitions by different universities, CSIRO and DST. That landscape has really changed.

And we want to be at the leading edge in terms of AM research — we’re not a manufacturing facility, so it’s all about research, developing new IP with commercial partners. The feeling is that a lot of the commercial machines we have, yes they’re still useful and will print things, but from a research perspective, there are so many of these printers in universities so really there’s no advantage for us. We’ll try and replace some of the printers that are getting on, but we need to come up with new things. So we’re looking at new technologies like WAM that complement our current research profile for the academics, and which are not too big a change from metal powder bed and powder fed systems, but which will increase our capability.

And we are looking at new feedstock, maybe new monitoring systems together with AML3D, as well as getting new projects with our research partners. And the targets for us are mainly defence and the bio areas. We see those as growth areas for future research projects.

The other system that we are getting as part of this Victorian grant is a powder bed system, from a company called Aconity3D. And it’s a research system with lots of bells and whistles, high-temperature operations up to 1,000 degrees which compares to conventional metal printers which are around 200, some are up to 500 degree preheat. That system will also come with a whole range of sensors — high-speed cameras, thermal cameras and so on, so we can monitor the process and relate that.

It’s all about research rather than just manufacturing components. The same thing with the wire arc system, which will be about researching new wire feedstocks, or process monitoring, putting new sensors on the process.

@AuManufacturing: So as a researcher, there’s much more new ground to be tilled with wire arc than laser-based metal 3D printing? 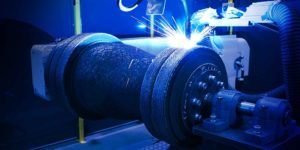 Milan Brandt: Absolutely. Wire arc has been around for a while, as you know. But there’s the ability now to 3D print things. AML3D and other companies that sell such machines are system integrators, and the glue is the software they have to allow them to build parts without the whole thing melting into a puddle of steel or titanium or something. That’s where the IP lies. And from our perspective, what we see is it needs a bit more in the process monitoring area. And that’s really looking at analysing the deposition process itself and linking that — basically for all the metal deposition systems, it’s certification. If I was a company, I’d want to know that the part that you build is going to perform the way you think it’s going to. And the only way to do that in my view is to have a whole range of sensors to qualify the process.

If you want to progress it with confidence as a manufacturing process then it needs a bit more development, in my view. And each part is going to be different, so you need to have process planning, in the sense of which is the best way from a toolpath perspective so you can minimise the stresses. Because you’re going to have kilometres of weld in a part so understanding the stresses in parts is a challenge. And the microstructure might be different at the start of the part compared to the finish, because you’ve got all this heat as you’re building it, and that’s what we’ve found with metal deposition, both powder fed and powder bed systems — the microstructure will change from bottom to top and that will of course affect the properties of that part. That still needs to be researched.

@AuManufacturing: Those are the main limitations for this process currently? The lack of data and the lack of consistency throughout a large part?

Milan Brandt: Yes, I believe so. You need data. When we talk to companies we work with in aerospace, they want to see that manufacturing or repair is evidence-based, so they can use the data. When they go to CASA or other bodies that will certify a part, they want to be able to show them a body of evidence. A lot of the time they are certifying the part, not necessarily the technology that made the part. That’s currently the state of play.

I see the same thing with the WAM process. It’s adding metal, yes, and you can build larger parts, but nevertheless you are melting metal, and metal shrinks, so there are stresses and defects.

Alex Kingsbury: You want to be able to fill the knowledge gaps that currently exit. As far as the wire arc system goes, we have an Australian company in AML, in the state next door, and there are not many of these companies worldwide. And AML is really the most complete provider of wire arc in that they offer a bureau and a system as well as their software. And in terms of their end market there are questions that exist And that’s a great part of the role of universities, to come in and fill those knowledge gaps so that there’s more confidence in adopting that technology. 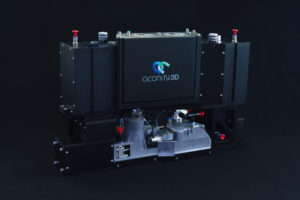 Wire arc adds an entirely new modality of additive to the centre. And the Aconity as well absolutely supercharges research, because of the amount of data you can get from that system. It starts peeling away a lot of those unknown areas that we have been wanting to understand more about, but haven’t been able to because of the lack of hardware.

@AuManufacturing: Their material makes a lot of the ability to print in mixed varieties of metals

Alex Kingsbury: There are two exciting things. There is the high-temperature bed, which goes up to 1,000 degrees and is an incredible capability that doesn’t exist outside of that system. And there is the multi-material printing.

Milan Brandt: You can do graded structures or you can do things like copper and steel, so sections of a part can be made of one alloy and other parts with a second alloy. You can really get complex parts that you can’t make any other way.

@AuManufacturing: I saw that the University of Queensland bought an AML3D system just before you did. What do they work on, what do you work on, and do you work together?

Milan Brandt: It’s Professor Matthew Dargusch and Dr Michael Bermingham. Michael has done a lot of work in Ti. I’m not sure what their focus is going to be. From our perspective, aluminium is one of the materials that we want to focus on. We have been in touch and are open to collaborating with them.

And the other area we’d like to continue working on is titanium with powder bed systems. And there’s interest from organisations like RUAG and DST. But there are challenges in terms of depositing titanium outside of a chamber — oxidation is an issue and we need to look at how we can deposit this material and get the properties that they need.

Milan Brandt: We are familiar with things like toolpath creation and how to build things. Obviously AML3D has their own software, but we think we can add to the software tools. They are working with other universities and are open to working with us when it comes to new materials and collecting data on properties. If we have any industry-based projects it just depends whether they’re involved in that or not.

Alex Kingsbury: Deakin has just had announcements with AML. We’ve got good relationships with Deakin and have started the conversation with them about collaborating. It’s worth mentioning as well that the equipment was supported with a letter of intent from CSIRO so we’ll probably kick off something with them as well.

@AuManufacturing: What are you investigating for your current PhD, Alex? We ask this to get an example of a current cutting-edge problem involving the use of WAM.

Alex Kingsbury: I’ll be looking at a new class of alloys, high-temperature performance aluminium alloys, which perform well strength-wise at high-temperatures. The particular alloy system I am looking at is an aluminium-cerium alloy, which I think is exciting and has a lot of potential for increasing those high-temperature properties. But one of the exciting things about cerium is — and we’ve talked before about aluminium-scandium, which I have a real interest in — and looking further back into the supply chain. The opportunity with cerium is that it’s a rare earth that is mined in excess of its demand. And the reason is that those rare earths are commingled, so you need a lot of the types of rare earths, which you end up extracting very little of. So cerium is part of that joint package of rare earths. You end up with a lot of excess of cerium, and there aren’t too many uses for it. SO this is a really great use of cerium, it’s really low cost, but it has a really fabulous effect on an aluminium alloy. It has a lot of applicability in those high-temperature applications: aerospace, sure, as well as power generation and potentially automotive.

Brandt and others will discuss the AMP’s recent investments at the Latest AM Research Opportunities @ RMIT web event on Thursday morning. More information about the event can be seen here.