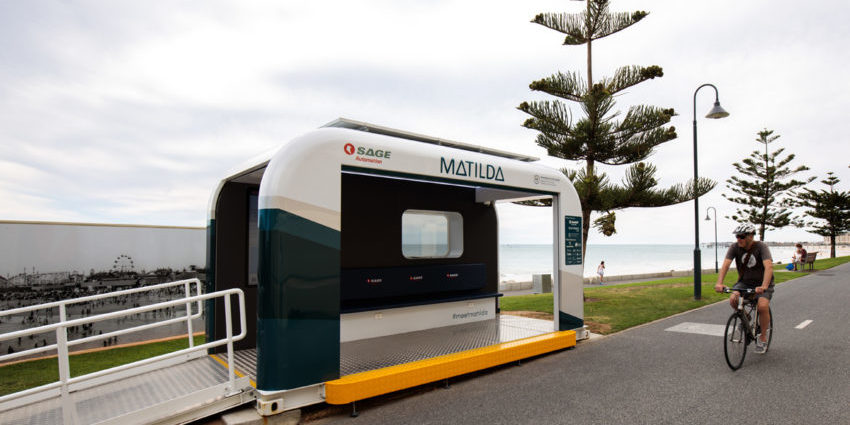 Developed by SAGE Automation, the mobile Matilda transport hub aims to work with any driverless vehicles while providing users with an interactive experience to aid in their commute.

SAGE Chief Executive Officer Adrian Fahey said the hub was designed for first mile, last mile transport or special events and would open up transport options for people with disabilities.

“Matilda provides a seamless, tailored transit service by autonomously communicating with any driverless vehicle and the people who want to commute,” said Fahey.

“This type of integrated technology trial has never been done anywhere in the world before, and we look forward to giving people an interactive, personalised experience, including real-time travel updates and route assistance through Matilda, and testing how this exciting technology interacts with the Local Motors driverless shuttle.”

The trial couples the Matilda bus stop with an Olli shuttle designed by autonomous vehicle company Local Motors and will demonstrate how driverless technologies can share public space with pedestrians, cyclists and recreational activities.

The six-month trial runs 900m along a busy foreshore walkway in Glenelg, a seaside suburb of Adelaide, between a hotel and a popular kiosk. A Matilda hub at each end of the route allows users to book the free ride, see where the shuttle is, and ask Matilda about the local area, or even for a joke.

“Passengers can ‘talk’ to our Matilda transit hub, receive directions, book a ride using touchscreen technology, receive congestion alerts and even ask questions about local tourist attractions or where to get a cold drink,” Fahey said.

Raphael Toda, the project manager from Local Motors, said trials like this represented the first step in challenging people’s mindsets to encourage them to think differently about how they move around.

“We recognize the South Australian government for its leadership and commitment to support this trial through the Future Mobility Lab,” he said.

“It’s South Australia’s preparedness to invest in testing, research and development of connected and automated vehicle technologies that provides a significant advantage in this emerging global industry.

“It is sure to create new, specialized high-technical jobs and export market opportunities.”

The easily transportable Matilda hub was developed and manufactured in South Australia by SAGE Automation and Sonnex, a company SAGE worked with as contractors at the now defunct Holden car factory.

The technology has been in development for almost a year, with a major component being engineering services to help people with limited mobility use the hub.

Henry Clayden-Rose, who joined the project on a work placement from the University of Adelaide, worked on user cases to ensure people with different abilities could use the hub and transport system.

“I have a vision impairment so I have an understanding of what the user groups are struggling through,” Clayden-Rose said.

“When it comes to mobility the communities are very timid and I think they need people to actually reach out, which is what we are trying to do with this project.”

The Matilda stop uses IBM Watson technology for voice activation, allowing passengers to ask questions and receive answers, as well as KinTrans software for interactive sign language. The hub also has audio and visual cues to assist anyone with visual and hearing impairments, as well as making it easier for elderly commuters.

SAGE Automation will monitor the system from its National Operations Centre at the nearby Tonsley Innovation Precinct and will use the data to enhance future deployments.

Clayden-Rose said they wanted as many people to use the hub and ride the route as possible so SAGE could tweak the system to help more people.

“What we really want is their user feedback from it so we can improve the technology.”

The trial will further position Adelaide and South Australia at the forefront of autonomous vehicle technology and innovation.

In 2016, South Australia became the first state in the country to introduce laws allowing for trials of driverless cars on open public roads and hosted the 3rd International Driverless Vehicle Summit in Adelaide in November 2018.