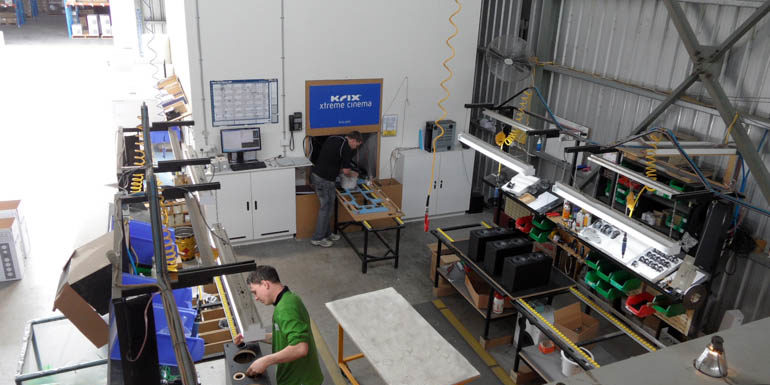 Specialisation in niche manufacturing can connect South Australian companies with a keen global market – if their products are good enough, competitive in price and backed by an unwavering commitment to research and development.

Elite loudspeaker manufacturer Krix has enjoyed sustained success through 45 years, a family company that is still based in Adelaide’s southern suburbs and has about 25 staff, including five Krix brothers.

Krix has made speakers for more than 3500 cinemas in 30 countries, and thousands more systems for private homes – providing a strong answer to those who fear that manufacturing faces a perilous future in SA.

“The products have to be very good, for starters, but sustained business outcomes also reflect a very strong belief in what we do,” says managing director Gary Krix.

“We have a culture that reflects our pride in delivering products of world’s best standard. It all builds up over a long time – our reputation for reliability, acoustic performance, build quality and service – and our growth has been about understanding many new markets that aren’t on everyone’s radar, such as the Middle East and India.”

Recent growth for the company has been spurred by an ongoing relationship with Dubai-based VOX Cinemas, the Middle East’s largest and fastest growing cinema chain, with cinema complexes in the UAE, Oman, Egypt, Bahrain, Lebanon and Qatar.

Krix has installed its systems in more than 300 VOX cinemas in the past three years, with another 200 planned in the next two years. A key to this success has been the durability and efficiency of the Krix systems, which VOX Cinemas has identified as representing premium value for money.

“Commercial cinemas are a tough business and can be very price driven but some proprietors will take the long view and see a Krix system as being more cost effective in the long-run,” says Gary. “We have products operating in Dubai that were installed in 1999, and that has impressed a lot of buyers.”

Such esteem is built on a long history of manufacturing excellence. Electronics engineer Scott Krix started making hi-fi speakers in his garage in 1974, then opened a small retail shop, the Acoustic Foundry, in Goodwood, before installing the first Krix theatre system at the nearby Capri Cinema in 1978.

Within five years, Krix speaker systems were installed in cinemas throughout Australia, which created a huge workload in the Krix factory at Hackham. A typical cinema has about 20 speakers, including three main front speakers, two sub-woofers and about 15 surround speakers along the side walls and back of the cinema.

Exporting commenced by the early 1990s, as cinema multiplexes began to flourish – but unexpected challenges lay ahead.

The global financial crisis of 2007 led to soft demand for high-end goods and Krix sales suffered as a result, compounded in export markets by a high Australian dollar. The Krix brothers’ solution was to make their systems better, rather than try to compete on price against multi-national brands, which were mass-producing their products in countries with low labour costs.

“We improved many aspects of our products, then we began developing new markets and, over time, it’s paying off,” Gary says.

Due to the prevalence of Krix systems at VOX Cinemas, a second cinema chain in the Middle East has also started using Krix systems, and a distributor is selling Krix’s high-end Series X, modular MX and SX home cinema systems into a rapidly expanding consumer market.

In China, about 30 cinemas have installed Krix sound systems in recent years, and the first Krix system has just been installed in an Indian cinema. Gary says a more interesting development is a sharp increase in high-end home cinema speaker systems in both China and India.

Exports account for about half of Krix’s revenue, which is split evenly between cinema and in-home products, but Australia remains a strong market, with Gary explaining there’s still good cinema growth here.

“Perseverance has been crucial,” says Gary. “Export sales never occur through just one international sales trip – and we had to get it exactly right in Australia first, before we even considered exporting. We’ve also learned that not every product works in every market.

“It has been an important point of difference for a small manufacturer like us to make specific products according to customer requests.”

Gary says that paying such close attention to the needs of its customers and being nimble enough to tailor products for specific needs has been a key to Krix surviving the roller coaster ride of business fortune.

“In a way, we’re glad we’ve endured such big challenges, even though we don’t want to go through them again,” he says. “But we’ve maintained solid belief in our future, backed by continual research and development. If our products keep progressing, we keep moving forward.”