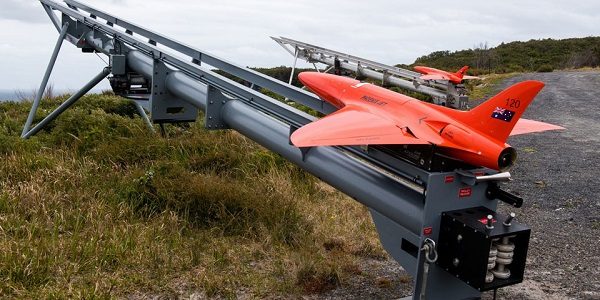 Two of the Australian-made Phoenix drones simultaneously ‘attacked’ the ships flying in low at 300kts.

According to the company: “Both targets flew faultlessly and turned precisely together to initially attack two of the ships.

“During the attack one target was commanded to break away and switch its attack profile in order to threaten the third ship.”

A four person flight crew managed the attack from land-based catapult launchers and guided the jets to commence their attack within 10 seconds of each other.

The dual target mission was designed to test the vessels’ sophisticated Aegis combat systems and both Hobart and Sydney successfully launched a Standard Missile 2.

Defence minister Melissa Price witnessed the mission from on board HMAS Hobart.

The Phoenix Jet has been developed specifically for the defence industry as a high performance training solution for a variety of gun and air defence missile systems.

The jet is of composite construction, and has a wingspan of 2.2 metres and is 2.4 metres long.

Manufacturing news briefs – stories you might have missed
July 19, 2021