Albury to get $32 million hydro-powered battery 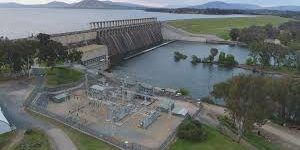 The NSW government has announced approval for the country’s first hydro-powered battery project, with construction expected to begin later this year.

The estimated $32 million project would be built near and charged by the Hume Hydro Power Station (pictured), which supplies power to 40,000 homes, said planning minister Rob Stokes.
“The battery will be able to dispatch energy to the grid during peak demand, boosting grid stability and energy security in what is the first co-located battery and hydro project in Australia,” he said in a statement.
Albury state MP Justin Clancy welcomed the news, and said it would create 40 construction jobs.
“We know New South Wales has some of the best hydro opportunities anywhere in the world and this sort of battery innovation adds to the renewable energy mix right across the State,” added NSW energy and environment minister Matt Kean.
According to the NSW planning department’s website, the storage facility will have a capacity of 40 Megawatt hours.
Picture: rjeglobal.com/hume-hydro-power-station
Subscribe to our free @AuManufacturing newsletter here.
By EditorFebruary 5, 2021
Share this post
Share on FacebookShare on Facebook TweetShare on Twitter Share on LinkedInShare on LinkedIn Pin itShare on Pinterest Share on WhatsAppShare on WhatsApp