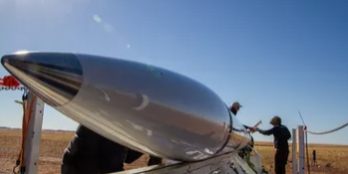 Gilmour Space, the University of Southern Queensland, Protonautics and Graphene Manufacturing Group are hoping to cut the weight of Gilmour’s rockets to deliver payloads of up to 250 kg such as small satellites into Low Earth Orbits (LEO).

A lighter tank will enable Gilmour to launch heavier payloads than it it used conventional aluminium construction to make the tanks.

Gilmour Space and University of Southern Queensland’s $12 million effort to produce linerless composite tanks for space was revealed in @AuManufacturing news in February.

The collaborative project was supported by a $3 million CRC-P grant.

Now AMGC and Gilmour have announced contributions of $224,500 each in matched funding to manufacture a new, lighter, composite propulsion tank.

Gilmour Space CEO and founder, Adam Gilmour said, collaborating with outside organisations has been the way to reach commercialisation more quickly.

Jens Goennemann, Managing Director for the Advanced Manufacturing Growth Centre said, “The relationship between Gilmour Space and its partners is further evidence that when Australian companies collaborate, they can achieve solutions to complex problems, resulting in a world-leading product.”