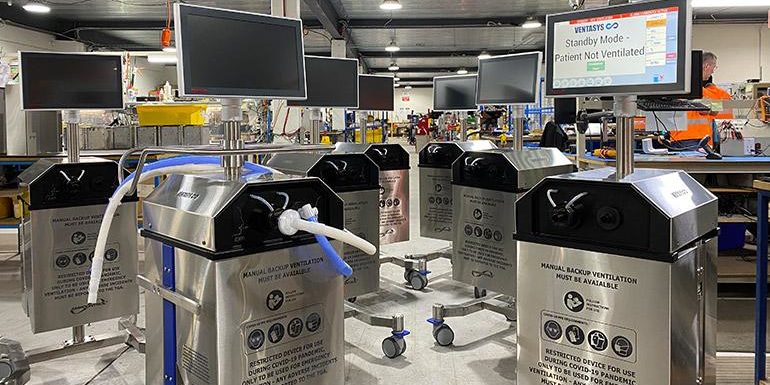 Electrical, engineering and mining technology company Ampcontrol has unveiled its Australian developed and made emergency ventilator, the ‘Ventasys’.

The Tomago company developed the Ventasys in partnership with the NSW Government as part of the COVID-19 response, and will now progress to full manufacturing with components ordered for up to 100 units.

Ampcontrol developed the machine in response to the state’s ‘call-to-arms’ in March 2020 to design and develop a low-cost, life-saving back-up ventilator to fight the COVID-19 pandemic.

Ampcontrol CEO, Rod Henderson said: “To turn a concept into a first-class lifesaving piece of medical equipment within such a critical timeframe is testament to the highly advanced capability and skilled expertise in our region.

“The collaborative approach adopted to tackle this project in conjunction with clinicians at the John Hunter Hospital, proves the ability of the local industry to rapidly pivot and solve unique problems.”

Henderson said Ventasys and other Covid-19 developments had shown what could be achieved when there are strong partnerships between government, university, and industry.

“We have shown that we can do these things better and more quickly in Australia.”

As a member of the Committee For The Hunter and the Hunter Central MedTech Industry Network, Ampcontrol called for continued government partnerships in research & development, infrastructure, and product innovation.

“With the continued support of government, I am confident as a region we can build an industry leading medical manufacturing hub where businesses, researchers, students, and trainees work side-by-side developing new ideas, learning pathways, products and services with commercial application.

“The development of strategically important domestic manufacturing within the Hunter will provide immense benefit to the local industry, economy, and community.”

Ampcontrol’s application for TGA (Therapeutic Goods Administration) ‘Permission To Supply’ the Ventasys for COVID-19 use in Australia is expected to be granted in the coming weeks.