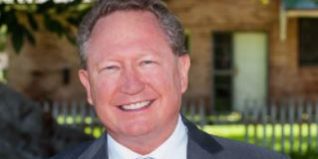 Forrest said: “We aim to start building Australia’s first green steel pilot plant this year, with a commercial plant in the
Pilbara, powered entirely by wind and solar, in the next few years.”

Forrest backgrounded his move by discussing the challenges the world faced to decarbonise the economy, and the choice for Australia which was facing disaster in its coal export sector.

“I’ve always believed out of every setback, is the seed of equal or greater opportunity.

“We produce over 40 per cent of the world’s iron ore, and our potential green energy and hydrogen
resources are immeasurable.

“Australia is in an absolutely unique position to scale green steel.”

Forrest’s remarkable conversion came following a bout of Covid-19 which saw him reflect in discussions with ‘sovereign leaders, businesspeople, politicians and technology developers.’

“It was their genuine belief that the time for green hydrogen had come.

“The question wasn’t whether green hydrogen would become the next global energy form – it was
which company would have the resilience to take the risk and truly test green hydrogen at global,
industrial scale?

“The board and I decided Fortescue would be that first mover.”

FMG is now undertaking feasibility studies that could lead to some 300 GW of power – more than four
times what Australia can produce.

The company is targeting hydro-electricity and geothermal, and solar, with a ‘final aim is 1,000 gigawatts of zero-emissions energy’.

FMG has already disrupted the global iron ore supply industry and, while BHP and Rio Tinto have abandoned value-adding ore in Australia, it is again FMG which has set its sights on disrupting steel industries.

“In one, you replace coal in the furnace with our old friend, green hydrogen, (and) you get steel – but instead of emitting vast clouds of CO2, you produce nothing more than water vapour.

“To strengthen the steel, you simply add the carbon separately. It bonds into the metal rather than
dispersing into the atmosphere. Beautiful.

“The other way to make green steel – the radical approach – is to scrap the blast furnace altogether and
just zap the ore with renewable electricity.

“Fortescue is trialling both methods.”

Forrest said green steel had the capacity to generate well over 40,000 jobs.

“I volunteer and call on fellow leaders to help drive this industry, power our economy and protect the
jobs of fellow Australians, as we make this critical transition.

“The immediate and multiplier impact on the Australian economy, if we get this right, could be nothing
short of nation-building.”

Forrest is already taking action, revealing that by the end of this year FMG’s trucks would be powered by renewable energy.

“We also aiming to develop green iron ore trains – that are powered by either renewable electricity
or green ammonia.

“Currently, the global shipping industry is one of the single biggest polluters in the world – so, this year,
we’ll begin to settle designs that also allow our ships to also run on zero-pollution, green ammonia.”