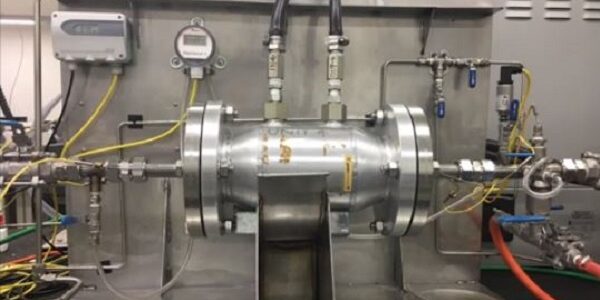 Frontier’s members plan to spend US$925 million on carbon removal over the next nine years, to stimulate and accelerate the development of carbon removal technology.

AspiraDAC and Southern Green Gas are working on the world’s first solar-powered DAC project of one tonne per day (tpd), or 310 tonne per annum (tpa), which has been made possible by funding from the federal government’s Carbon Capture Use and Storage Development Fund (CCUS).

Executive director of AspiraDAC Julian Turecek said: “Australia’s abundant solar energy potential means it is a perfect location for DAC, and with the use of solar-powered modules the facility can operate independently of traditional energy sources.

Its first generation product (pictured), developed with the University of Sydney, will be followed by a second generation unit manufactured using additive manufacturing techniques.

The company is aiming for a ‘stretch goal’ of less than $20 per tonne CO2 for compression, transport and storage.

AspiraDAC, a subsidiary of Corporate Carbon, is working with Southern Green Gas to produce and deploy the project’s solar-powered modules by the end of 2022.

Turecek said: “With Southern Green Gas pioneering this technology – harnessing Australia’s incredible solar power resource and world-class storage reserves – we are currently completing the demonstration phase of this project and are looking to enter the construction phase later this year.

“What Frontier sees in AspiraDAC is the enormous potential in the range of technology developments we are ready to scale in the carbon removal sector.”

The Frontier advisory panel of 19 scientists and industry experts reviewed over 26 applications from five continents, to align with AspiraDAC and five other global providers.

Turecek said: “It is not without challenges, DAC technology is in its nascent stages, and agreements with customers such as the Frontier group will catalyse further development of the sector.”

Nan Ransohoff, who leads Frontier, said: “Getting durable carbon removal to gigaton-scale will likely require a diverse portfolio of approaches that have a path to low costs.