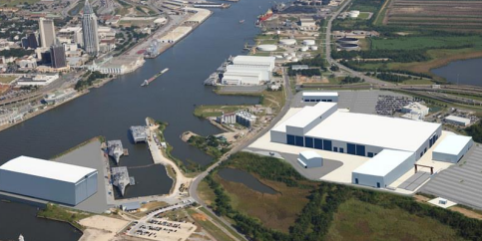 Funded through a loan from the US Department of Defence of US$50 million matched by company funds, the $131 million facility will prepare Austal to compete for new US Navy orders.

The company has delivered 24 multi-hull aluminium ships to the USN in the past nine years – Independence class Littoral Combat Ships and Spearhead class Expeditionary Fast Transports.

However the next major ship designs to be selected by the USN are likely going to be built in steel.

In February Austal bought 15 acres of waterside facilities including a dry dock and deep water berthing capabilities on the Mobile River to support its expansion.

On Friday Austal USA hosted a ceremony at Mobile to mark the start of construction of the new steel shipbuilding facility.

It was overseen by new interim President of Austal USA Rusty Murdaugh.

In February the company accepted the resignation of US President Craig Perciavalle following the completion of an investigation into cost escalations of the LCS ships built in Mobile.

“(These are) facilities that will enable Austal USA to build the next generation of the US Navy and US Coast Guards’ ships.”

Construction should be completed by April, 2022.