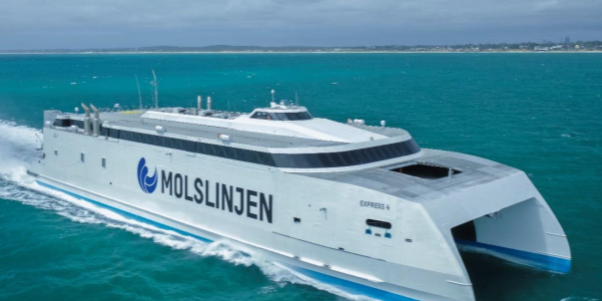 Perth global shipbuilder Austal (ASX: ASB) has ended a trading halt in its shares ending speculation that it was waiting to hear the result of a $3 billion defence contyract.

At 9.30am today the company announced it had won a $136 million order for its biggest-ever catamaran ferry – a 115 metre long giant (pictured) for Molslinjen of Denmark.

The new ship, to be known as Auto Express 115, is a follow-up order for the 109 metre Express 4 delivered to Molslinjen in January.

The ferry will be the largest by volume ever built by Austal and will be constructed starting in 2020 in the company’s recently enlarged Philippines shipyard.

Design will take place at Henderson in Perth over a 12 month period embodying all-Australian IP, with the company fitting a number of systems and components made in Australia by itself or sub-contractors.

The Auto Express 115 will be fitted with a new generation of medium-speed engines that are LNG compatible.

With a capacity for 1,640 passengers and 450 cars, the ship will be capable of speeds of close to 37 knots, and features Austal’s proprietary Motion Control and MARINELINK-Smart systems to improve passenger comfort and operator efficiency.

Austal builds aluminium catamaran and trimaran passenger ferries and naval vessels up to 127 metres in length in Perth, Cebu and Mobile, Alabama It operates a leased yard in Vietnam.

The trading halt announced on Wednesday was to allow the parties to resolve security arrangements under the build contract.