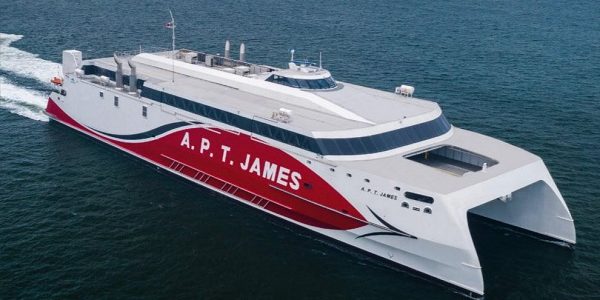 The world’s largest aluminium shipbuilder Austal today reported earnings before interest and tax of $70.5 million in the half year to December 31, well up on the previous corresponding period’s $59.9 million.

However first half revenue actually fell from $1 billion to $840 million due to a higher A$, lower throughput in the United States, a slowdown in Australasia and some Covid-19 delays.

CEO Paddy Gregg said: “The strong interim financial results were driven by excellent shipbuilding operating margins in both of our US and Australasia operations, which flowed through to an enhanced bottom line.

“This highlights the success of the pragmatic initiatives Austal has implemented to increase our efficiency, reduce our cost base and set business up for sustained profitability.”

Perth-based Austal delivered 10 major new vessels from its six shipyards here and internationally in the first six months and now has a $2.8 billion orderbook.

With 341 vessels in total contracted the company is the world’s largest builder of aluminium hulled ships – with steel vessels now being built in Perth and shortly, in the United States.

During the half the company:

Again in the half the US, where the company is building two classes of multi-hulled vessels for the US Navy, accounted for 76 per cent of revenue, followed by Australia on 25 per cent.

However in the half construction of an 118 metre passenger ferry began in the Philippines, Austal’s Chinese joint venture delivered its largest and fastest ferry and Austal Vietnam delivered a 94 meter high-speed catamaran.

Austal maintained its profit guidance for the full year at $125 million but now expects revenues of $1.65 billion.

Further appreciation of the dollar is expected.