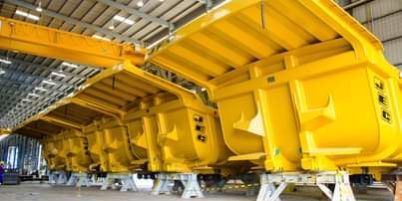 Perth mining equipment manufacturer Austin Engineering has more than doubled its order book over the past year on the back of a renewed focus on manufacturing efficiency and a recovery in the mining market.

The company announced today that it has received $81 million in new orders across the business in the three months to the end of February, leaving it with a 100 per cent increase in its order book level compared to the same point last financial year.

This is a significant order book lift over its last report in December when it said its order book was up 35 per cent year on year.

CEO David Singleton said: “The doubling of orders for equipment in just 12 months, and with most of the improvement in the last six months, is clear evidence the strategies under Austin 2.0 are working.

“Our hub and spoke and final assembly partnerships means we are markedly more cost competitive in the market.”

Under Singleton Austin has automated its factories building truck bodies in Perth, Indonesia and North America, and shifted final assembly of pre-fabricated parts closer to mine site.

Singleton, formerly head of Austal shibuilders, said: “Our continued, accelerated investment in new product innovation and technology means we are remaining at the forefront of our industry, aligned with the needs of our customers and maintaining relevance in the market.

“Our investment in advanced manufacturing means we are increasing our efficiencies in-house; the technology means we can increase production, equipment range and quality.”

A major change was moving staff at the company’s Perth factory to a four-day week – with extra shifts available to work on the fifth day potentially increasing output by 20 per cent without new investment.

The order improvement is across the whole business but led by USA, Chile and Indonesia.

The truck tray operation has remained strong but is now supported by stronger sales of buckets and other equipment.

Austin however is facing a challenging period in Western Australia which is under Level 2 government covid-19 restrictions, introducing ‘some logistics risks’. 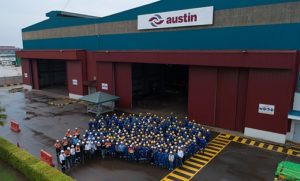