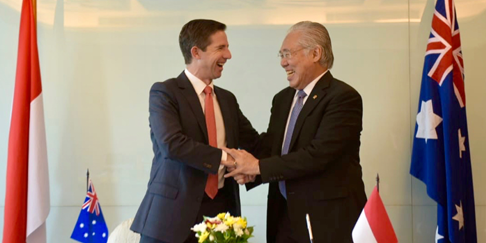 The agreement has implications for all sectors as 99 per cent of Australian goods by value will enter Indonesia duty-free or under significantly improved preferential arrangements by 2020.

While the government, as always with such trade deals, named agriculture and horticulture as the primary recipients of benefits, there should be a trade boost elsewhere.

Birmingham said in a statement: “IA-CEPA will also support Australian manufacturing in areas such as steel, copper and plastics.”

Australia’s two-way trade with Indonesia was worth $16.8 billion in 2017-18, making Indonesia our 13th largest trading partner.

“With a population of 270 million and high levels of economic growth, Indonesia is on track to become one of the world’s largest economies.

“This makes the strengthening of our ties both strategically and economically important.”

The agreement was finalised last year but signing was delayed over Indonesian concerns at Australian moves to shift its embassy in Israel to Jerusalem, a city occupied by Israel during war.

Both countries have to formally ratify the agreement, and in Australia it will face an inquiry by the Joint Standing Committee on Treaties (JSCOT).

Full details of the trade agreement can be found here.