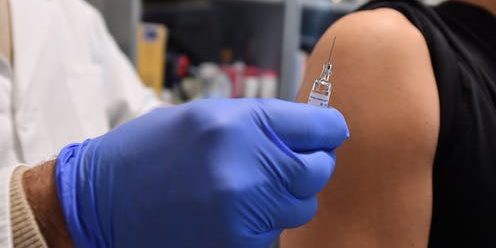 The Australian government is in talks with pharmaceutical company Pfizer about potentially supplying its COVID-19 vaccine. The company has also secured preliminary clearance to apply for a type of fast-tracked regulatory approval for this vaccine.

But even if clinical trials showed this vaccine was safe and effective, Australia couldn’t make enough doses. We just don’t have the manufacturing capacity or technology in place.

So, has Australia missed a trick in not tooling up for these mRNA vaccines?

What are mRNA vaccines?

mRNA vaccines are coated molecules of mRNA, similar to DNA, that carry the instructions for making a viral protein.

After injection into muscle, the mRNA is taken up by cells. Ribosomes, the cell’s protein factories, read the mRNA instructions and make the viral protein. These new proteins are exported from cells and the rest of the immunisation process is identical to other vaccines: our immune system mounts a response by recognising the proteins as foreign and developing antibodies against them.

mRNA vaccines have several advantages. Their production process is almost identical for any possible mRNA. This means mRNA vaccines can be rapidly designed for new viruses or strains. This speed of design is why the COVID-19 mRNA vaccines are current frontrunners, and will probably be the first to get approval by the US Food and Drug Administration.

mRNA vaccines can be potentially quicker and cleaner to make than other vaccines. Unlike other types of vaccines made in living cells such as chicken eggs or genetically modified cell cultures, mRNA molecules can be made in an apparatus called a bioreactor. Some mRNA vaccines, such as Imperial College London’s vaccine now undergoing testing, are even self-replicating. This means the mRNA can copy itself inside our cells, so protein production lasts longer and, potentially, fewer doses are needed.

However, mRNA vaccines also have some disadvantages. As a new technology, no mRNA vaccine has ever been approved for clinical use. Unlike other vaccines, we do not have years of data on the safety of this type of vaccine to reassure the public.

They also need to be stored at very low temperatures. For example, Moderna’s needs to be kept at -20℃ and Pfizer’s at -70℃. At normal refrigerator temperatures of 2-8℃, they tend to last just a day or two. This means distribution may be difficult, especially in the developing world.

And crucially, most countries — including Australia — don’t have the mRNA manufacturing capability needed to make these vaccines at the required scale. So while the production of mRNA is cleaner, it may also be slowed by supply chain issues.

Which mRNA vaccines are the frontrunners?

There are six mRNA COVID-19 vaccines in clinical trials:

The Moderna and CureVac candidates are both part of the COVAX initiative, a World Health Organisation-sponsored drive to boost vaccine research and give member countries a wider range of potential candidates.

As a COVAX member, Australia will have access to buy and distribute either of these vaccines if successful in clinical trials, and could also license the technology to make the vaccines domestically.

But Australia does not currently have the capacity to manufacture clinical-grade mRNA vaccines. Melbourne-headquartered global biotech firm CSL can make protein-based vaccines, and has expanded its capacity to include DNA/viral vaccines, but not mRNA.

CSIRO has facilities for making clinical-grade proteins for phase 1 and 2 clinical trials, but not vaccine-grade mRNA, and not at the scale needed for clinical trials, let alone for immunising the entire population.

In August, federal science and technology minister Karen Andrews, called on Australian businesses to come forward if they can help with vaccine production and distribution.

It is not publicly known whether any company responded indicating it could make mRNA vaccines.

With the federal government prepared to invest A$330 million in research for COVID vaccines and treatment, and mRNA vaccines clearly leading the global race, it’s possible some Australian biotech firms could pivot to mRNA production.

The CSL global product pipeline includes an mRNA vaccine against the flu in pre-clinical development. But CSL has issued no public statement about its capacity for Australian production of clinical-grade mRNA vaccines if this, or one of the COVID-19 mRNA candidate vaccines, requires a local supply. CSL has not declared any desire to establish mRNA manufacturing in Australia at this time.

So what should Australia do?

Australia’s first option will be to buy doses from overseas. But despite the COVAX deal it may still be at the end of a long queue, given the hundreds of millions of doses of Pfizer mRNA vaccine already pre-purchased by the United States, Japan and the European Union, and similar deals for these and other countries in negotiation with Moderna.

Compare this with Germany, where a planned rollout of the Pfizer vaccine to the elderly will start 24 hours after emergency approval, potentially as early as this month.

With the dose costing US$20-40 per person, even if we can secure doses, it could cost up to A$1 billion to immunise the Australian population if we buy the vaccine.

The second option is to to set up production of mRNA vaccines here, potentially led by a biotech firm with approval to make clinical-grade therapeutics. As a rough estimate, we calculate it could cost as little as A$100 million to make sufficient vaccine domestically. But it will mean a significant lag time, perhaps 12 months, to set up the infrastructure and train staff.

The lack of capacity to make mRNA is both a threat and an opportunity for the Australian biotechnology sector. Given the speed at which this technology has been applied to COVID-19, it would be useful to have this production capacity in Australia, so we can quickly respond to future pandemics.

Beyond vaccines, mRNA could be used for other promising therapies for cancer and other genetic diseases.

There is also the opportunity for creative innovation in this area. Tesla used its robotics capacity to create an mRNA synthesis platform for German biotech firm CureVac.

With investment by the federal government and willingness from the private sector, Australia could be part of this innovation wave. This technology would be useful for COVID-19 mRNA vaccines, future pandemics, and future medicines more broadly.