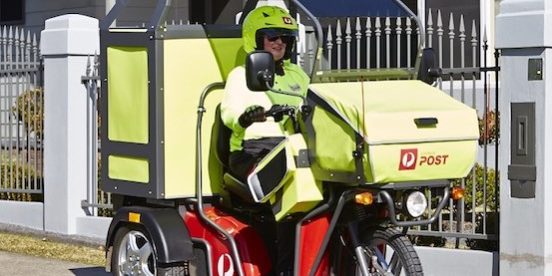 Australia Post has announced a five-week trial of Australian-assembled three-wheeled electric vehicles, to take place in the Melbourne suburb of Lilydale.

The government-owned postal service said in a statement that the trial would boost local jobs, and that Lilydale represented an ideal environment to trial the small EVs, which would complement larger vehicles currently in use.

“[T]he yearly growth rate in Lilydale is higher than the national average at close to 21 per cent. The area saw almost 79 per cent of households purchasing online in 2018, above the national average of 73 per cent,” said Mitch Buxton, Australia Post General Manager Network Optimisation.

“The Stealth OzPOD has been developed over the past two and a half years, and is designed to cater for Australian conditions, with added safety and stability, wet weather, and gradient and surface measures.”
According to the release, the pods were built locally, had a top speed of 50 kilometres per hour, and possessed a carrying capacity of 720 litres.
The trial follows an order in February by Australia Post for 1,000 three-wheel delivery EVs, designed and manufactured by the Swiss company Kyburz.
Picture: thedriven.io
Subscribe to our free @AuManufacturing newsletter here.
By EditorJune 12, 2019
Share this post
Share on FacebookShare on Facebook TweetShare on Twitter Share on LinkedInShare on LinkedIn Pin itShare on Pinterest Share on WhatsAppShare on WhatsApp