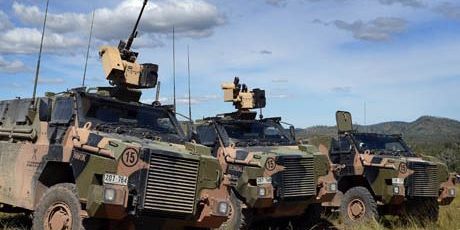 Australian Prime Minister Scott Morrison has agreed to send Australian-made Bushmaster vehicles to Ukraine, after a plea from the nation’s wartime President.

Earlier Ukraine’s president, Volodymyr Zelenskiy made a speech to federal parliament calling for Australia to send the country weapons systems including the Bushmaster.

Speaking through an interpreter the khaki-clad president said some of the more than 1,000 Bushmasters serving in Australia would ‘do much more for our common freedom and security than staying parked on your land’.

The government appeared to have been surprised by the request and spent some time evaluating options for making it happen.

Speaking later, Morrison said: “We’re not just sending our prayers, we are sending our guns, our ammunitions, humanitarian aid, all of this, our body armour.

“We’re going to be sending our armoured vehicles, our Bushmasters as well, and we’ll be flying them over there on our C-17 (Globemasters).”

Morrison did not say how many vehicles would be sent or when they would arrive in Ukraine.

Zelenskiy said the priority was to keep Ukrainian troops fighting against an evil Russia.

“For example you have very good armoured personnel vehicles, Bushmasters, that could help Ukraine substantially, and other pieces of equipment that could strengthen our position in terms of armament.

“If you have an opportunity to share this with us we would be very grateful.”

1,052 Bushmasters in total have been ordered by the Australian Defence Force, serving over the past two decades in East Timor, Afghanistan and Iraq.

Australia’s Bushmasters are set up for a number of tasks with some fitted with remote weapons stations capable of carrying machine guns, grenade launchers and cannon which can be operated by soldiers from inside their vehicle.

Manufactured by Electro Optic Systems in Canberra, the CROWS RWS can also fire an anti-tank missile.